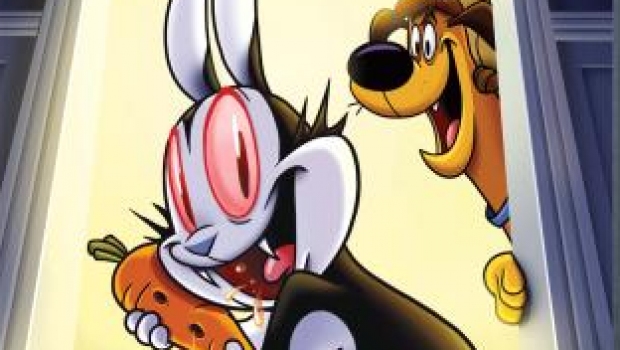 It looked funny when I saw some early pics of it. So this 1st season dvd came in and I googled the name. Only to find out it’s based on a children’s book series. Didn’t know that, never heard of it either. Maybe because I’m from the other side of the pond, but I can’t remember ever having heard of it before. As far as I can tell it was never translated in Dutch, my native language.
Seven books have been published to date, the first one back in 1979, the last one in 2006. Initially written by Deborah Howe and James Howe. Deborah never experienced the first book’s publication as she died just before at the age of 31.
The books are about a vampire bunny who sucks the juice out of vegetables….uhm…ok… The Monroe family find him after watching Dracula at the movies, hence the name Bunnicula. They have a cat, Chester, who thinks Bunnicula is a vampire and he wants to protect the Monroes from this evil beast, aided by Harold, the family’s dog. The story is told through the eyes of Harold.

There have been 2 stage shows and there’s also a movie from 1982, animated and produced by the Ruby-Spears company, which was founded by 2 cartoon veterans responsible for Space Ghost and Scooby Doo. With the Ruby-spears company they produced Fangface, Goldie Gold and Action Jack, The Plastic Man Comedy/Adventure Show, Thundarr the Barbarian, Rubik, the Amazing Cube, Alvin and the Chipmunks, Mister T, Sectaurs, The Centurions, Superman, the Police Academy animated series, Mega man and others. Bunnicula 1982 was written by Mark Evanier, a well known name for comic book afficionados. After finishing watching this new Bunnicula show I came across the 1982 22 minute animated version online and watched it. And by that I found out Chester is the more dumb character and Harold is the smarter one, which is exactly the opposite of the latest show the review is about. There’s also 2 sons in the family and a mom, the new show has a father and daughter. So it’s a bit altered for the new show, but approved by James Howe who is involved with the production. You can definitely tell this 1982 version is made by the Scooby Doo guys by the looks and sounds. But it was nowhere near as funny as this latest incarnation airing now.

The cartoon is Bunnicula – the celery stalks at midnight, which is the title of the 3rd book. It starts off much the same as the premise of the books sound, but no sign of Bunnicula being found or whatever, it’s straight into it all with Bunnicula, Chester, Harold and Mina Monroe. And of course she’s called Mina, after Mina Harker from the Dracula book. Oh and there’s an evil floating monkey mummy kind of creature after Mina?
Now Chester the cat is the grumpy selfproclaimed smart one with a love/hate relationship with Bunnicula, Harold the dog is the goofy dumb and lovable character and Bunnicula is……well…Bunnicula, the vampire bunny that only talks gibberish with a normal understandable word here and there. He magically pulls out an harmonica out of his ear in episode 2 and in episode 1 he transforms his bunny ears into batwings enabling him to fly, all in oldfashioned cartoon logic and style of course. And throughout the season you’ll see he has plenty of weird tricks up his sleeve. Mina is the gothy type teenage girl who’s into horror and supernatural spooky (funny) stuff and loves chatting on/offline with her friends. The trio of Bunnicula, Chester and Harold just looooove her. They live in New Orleans, the perfect setting of course for the spooky stuff.

And cartoon spooky it is, with colourful ghouls, creatures and whatnot, like a spiderlamb, a plumbing traveling alligator ghost making people and animals cry, King Arthur’s owl, Knight owl, now a ghost and protecting people from ghosts, a Viking pirate’s ghost trapped in a squeaky chicken toy swinging a big axe, a rat trapped in a vhs videotape, cats turning into weredudes, a vegetable Frankenstein doll coming to life with Bunnicula falling in love with her, Grimbyte, a monster from the internet who took over a crow to get mobile in the real world speaking with a cocky English accent and feeding off hate, Lugosi the guinea pig and more. Cartoon spooky….and funny.

It’s a mix of old and new cartoon. Very much a traditional cartoon style type of animation, not the more ‘modern’ stuff with weird anatomy, shaky lines and things like that, so it’s easy on the eyes. But it also has a modern feel at times, with some weirder jokes like Bunnicula stripping off his arm exposing his bones, drooling monsters, Harold looking as if he was neutered with a cap on his head asking Chester if he would like to see the scar, which was on his belly, hah! So it’s a mix of oldschool and newer stuff, with the balance more in favor of oldschool, which is a big plus and the tempo is definitely high enough. The whole supernatural theme of it all makes it perfect for today. It has jokes adults will like too while kids can laugh at the same time. And kids can watch this without any doubt, age label says 6, which is ok really. And the animation is absolutely well done.

The series is directed by Maxwell Atoms, of The grim adventures of Billy and Mandy fame and features Sean Astin doing the voice of Chester.
I saw 20 episodes, season 1.1 which is half of season 1. A dvd will be out with the second half, labeled as 1.2. Season 2 is airing now in the USA and from what I read there’s a season 3 and 4 in the works.
I had a fun time watching it, recommended for kids and you grown-ups out there who never totally lost the kid inside and still chuckle when watching Warner bros. Loony tunes and Scooby Doo.