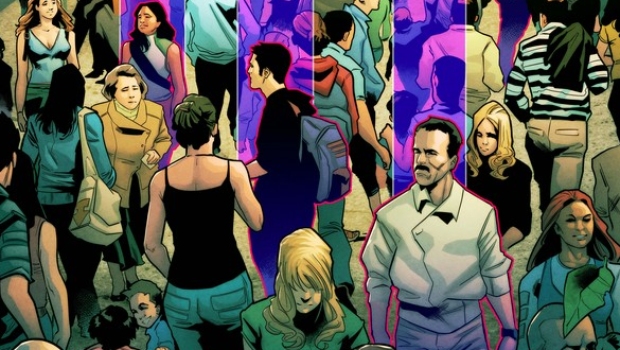 This issue opens with a scientist named Patterson headed toward his lab, he looks distraught and in a hurry, only to find his co-workers throwing him a surprise party as he’s just been promoted. Patterson tries to show some positive response, but what happens next throws the whole room into an uproar. You see Patterson wasn’t destined to accept his promotion, a higher call prevented him from taking it.

The Creative Team:
Adam Kiamil draws us into this sordid tale of a pharmaceutical company gone wrong and shows us the result of corporate greed and disrespect for ethical practices. A certain virus known of as Strix has infected the human race but is only active in one percent of us. The main character seems to have some type of psychic powers as a result and is isolated on some kind of base. what I’m enjoying most about this issue is how realistic the characters are. Their interactions are believable and they behave in ways you’d expect people to behave on a daily basis. Some of the one-percenters, as they’ve been dubbed, seem to be able to control the active gene while others can’t. this makes the whole tale unpredictable and is a classic page-turner. Great stuff includes the banter between teacher and students during class and a one-percenter’s strange behavior at a bank.
Ton Lima’s art is finely detailed and works well with Kiamil’s words. I especially enjoyed how dark Patterson’s eyes were which leads us to think that there’s something not quite right with the character. From the ominous prolog to the jump to present day, He helps to make these characters believable. Highlights include the fate of Patterson and the commotion in the bank.

In Conclusion:
This is a realistic tale that treats its subject matter with a reverence we don’t see every day in a comic book. The characters are like everyday people who could be our neighbors, which makes what happens to them so much more frightening than anything in a modern horror movie with over-exaggerated pompous asshole  characters that most of us want the guy in the hockey mask to kill, I’m loving the direction this title is taking and it’s highly recommended. **** (9.1 rating)