Review: Cinderella: Age of Darkness #1 (of 3) – Comics for Sinners
News 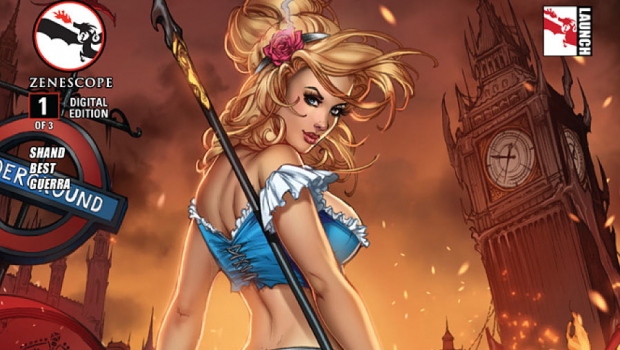 I’m something of a late arrival to the Zenescope comics universe. Of course I know what Zenescope Entertainment is, and the fantasy-based, scantily clad heroines in which the company specializes—what reader of Comics for Sinners isn’t familiar with their titles?—but other than the two issues of their Charmed: Season 10 series that I’ve reviewed for this site, I hadn’t read much of their output. So when their latest release, Cinderella: Age of Darkness #1—the start of a three-issue miniseries—arrived in my inbox, I figured I’d be totally lost when it came to understanding the story’s setup.

Well, mark me down in the “Wrong” column. From the Story So Far recap on the inside front cover to the story itself, Cinderella’s tale is one that’s easy to follow—and even enjoy.

After the events of Zenescope’s massive crossover series Realm War—in which Earth was left devastated by the convergence of Oz, Wonderland, Neverland, and Myst on the planet’s dimensional plane—all the gods but Hades have been wiped out. That’s a problem for the Dark Queen who now rules the world—she doesn’t want any gods left alive—and one she wants resolved ASAP. Thus she turns to demented sorority girl and sociopathic assassin Cinderella (aka Cindy) to go forth and take care of business, which Cindy is more than willing to do, if only to prove that she’s not the brain-dead bumbler everyone—including the queen—considers her to be.

Writer Pat Shand (Charmed: Season 10) brings a Harley Quinn–like approach to Cindy: Sure, she’s a bloodthirsty nutjob, but you just can’t help but like her, and want to see her succeed, especially since all the other characters are absolutely certain she’ll fail. And Shand’s creative partner, newcomer artist Ryan Best, has a gift for camera angles and facial expressions, so he’s able to portray the femmes fatale of the Realm at their most appealing—and their most psychotic.

Bottom line? A miniseries starring a sexy, sociopathic female lead will certainly appeal to fans of Zenescope and bad girls, but the entertaining writing and the Harley-esque take on Cinderella might just appeal to other comic fans, as well. Give this first issue a try, and you might just find yourself joining Cindy for the remainder of her god-killing quest.