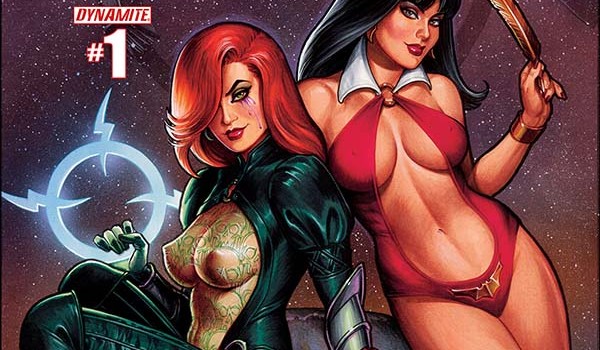 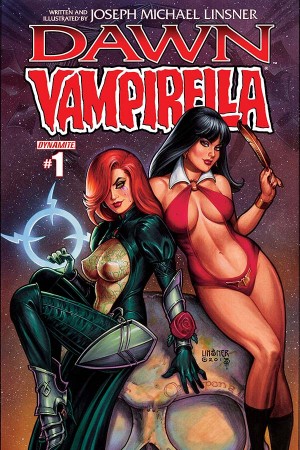 Vampirella: queen of the bad girls. Dawn: goddess of birth and rebirth. Two of comics’ most famous leading ladies during the 1990s, in what became known as the Bad Girl Era, when every comic publisher scrambled to have their own half-naked heroine starring in a series that, more often than not, was guaranteed to sell truckloads of copies. During that period, Vampi and Dawn were something of the high-water mark for the genre—and remain so even today. It’s just that, up to now, they’ve never crossed paths.

Dawn/Vampirella, courtesy of Dawn’s creator, writer/artist Joseph Michael Linsner, rectifies that situation. In it, the women find themselves prisoners of the demon Masodik, who’s in need of a bride to mother his intended future heir. In true comic-book crossover style, he suggests the women slug it out to determine the “winner.” (It’s what Stan Lee would’ve done, y’know!) But Dawn suggests a less violent, more cerebral way to settle the matter: a storytelling contest. 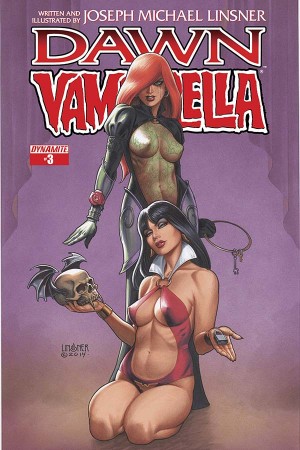 I understand the why of this approach. During her original Warren Publishing run, both before and after she became the lead feature, Vampirella was the hostess of her eponymous magazine, acting as a curvaceous counterpart to other anthology hosts like Tales From the Crypt’s Cryptkeeper, Twilight Zone’s Rod Serling, and even her Warren stablemates Uncle Creepy and Cousin Eerie. And Dawn began her career in the same manner in the late 1980s, hosting the anthology comic series Cry For Dawn, and then the late-‘90s’ Crypt of Dawn. So, it makes perfect sense that Linsner would take both ladies back to their storytelling roots and put a Scheherazade-like spin on it.

Issue #1’s “The Necklace” is an adaptation of a Guy de Maupassant tale from the 1890s, and involves two friends, one wealthy (Jeanne), the other poor (Mathilde)—played, respectively, by Vampi and Dawn—and an expensive-looking necklace that Mathilde borrows for a ball. Issue #2’s “The Silver Tongue & The Golden Rose” and issue #3’s “Kissing the Green Man” comprise a two-part tale, the first told by Vampirella, the second by Dawn. In it, two sisters—again, played by Vampi and Dawn—compete to lead their tribe/gang in a postapocalyptic New York City, with “Green Man” apparently a new spin on Dawn’s origin as the goddess of rebirth. It’s followed by “The Girl From Drakulon,” itself a spin on Vampi’s Warren-era origin as a vampiress from outer space, with new guest appearances by Edgar Allan Poe as the Earthman who crash-lands on her planet; vampires based on Count Orlock from the silent film Nosferatu; and Yvonne de Carlo’s Lily Munster as Vampi’s mother.

To be honest, though, for this first-time meeting of two of horror comics’ best leading ladies, I was hoping for something a bit more “event publishing” in tone than an anthology miniseries—especially since the similar-in-structure Vampirella: Feary Tales miniseries debuted around the same time as D/V #1. Still, Linsner’s artwork is certainly spectacular (as one would expect), and worth the price of admission.

Bottom line? The wonderful art makes this miniseries a treat for Linsner, Vampirella, and Dawn fans, but the anthology format prevents it from being the sort of “event publishing” project that those same fans (like me) were probably looking forward to. Nevertheless, I’d recommend picking up the sure-to-be-published trade paperback collection, so you can enjoy the amazing visuals all at once.