Review: Day of the Dead #1 (of 6) - Comics for Sinners
Kaching Comic Reviews 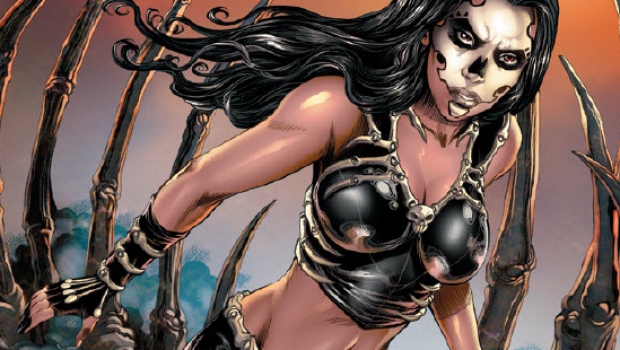 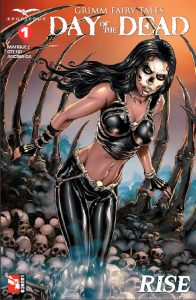 Another Zombie title, what makes this one different? This one is set in New Orleans during Mardi Gras, again, that’s been done before. But what hasn’t been done before is the character of Mary Medina, she was formally a secondary character, now given her own title. Death holds no power over her. It seems that a secret order needs Mary’s unique powers. She is in a race against time to discover their secret and stop their deadly actions. But is she powerful enough? This issue opens with some teenagers at Mardigras ready for the party, but one of them won’t make it home. I thought it was a great first issue that introduced some interesting characters.

Brusha and Marquez pull out all the stops in this first issue, it’s not just a set up for the next issue, but a relentless look at the depraved actions of the secret order. In the prequel, we see the order’s fatal ritual which is used to bring the dead back to life. The ritual is intended to make them more powerful and able to withstand the protagonist’s attack. Sacrifices will be made and the order intends to gain ultimate power. It’s a non-stop pulse-pounding tension filled first issue and the level of excitement brought about by these writers will make zombie fans drool while looking for more. Even if you read every zombie title out there and think you’ve seen it all, you should add this one to your collection. There’s a method to the zombie’s madness that you won’t find in any other zombie titles out there.

Ottero brings an element of fear to his titles that make him an excellent choice for the art in this issue, hopefully he’s on board for the whole series. He’s a great horror artist and his visuals bring a compelling sense of foreboding to all his horror titles, his opening scene of the ritual is haunting and brings about a feeling of dread that leads us to anticipate a chilling tale worthy of his unique abilities. Great stuff!

A prodigious look at an interesting character. Mary Medina, complete with skull face, is walking toward us with skulls and skeletons at her feet. She seems to be trapped by a giant rib cage. She has a fierce, determined look on her face. She’s ready to face the challenge presented to her in this title. The sky is orange but is turning into a dark blue with a fog rising at her feet. This should tell the comic store surfer exactly what to expect from this issue.

If you haven’t got enough zombie titles in your collection and you’re part of the crowd that thinks the “Walking Dead” is getting a little old and pretentious then you might want to give this one a shot! Mary Medina had been a secondary character but now she’s thrust into the forefront of this adventure and it looks like it’s shaping up to be another great horror title from one of Zenescope’s excellent creative teams!