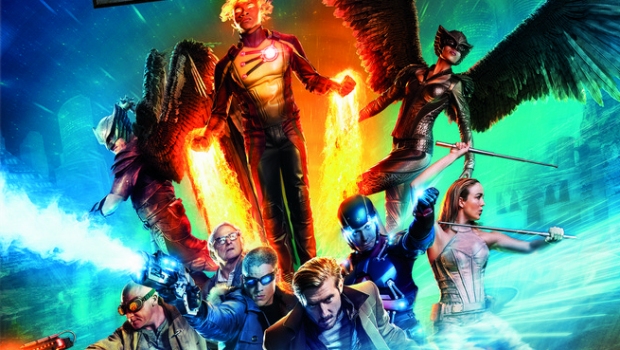 The Time Lord’s companion seems to have started his own franchise. Well, not really, but Arhur Darvill, playing the Eleventh Doctor’s companion Rory Williams has taken on the role of Time Master Rip Hunter in DC’s Legends of Tomorrow. Bringing together some old favourites to take on the eternal villain Vandal Savage in an attempt to bring him to justice once and for all.

Let’s get this straight, I didn’t grow up with comics and I’m sort of going the reverse way. First the movies and series, followed by the comics. I’m up to speed enough to recognize ‘Legends of tomorrow’ as DC’s attempt to bring together some of the minor heroes and villains from Arrow and The Flash with a few new additions and give them a chance to play around and show off. The team Rip Hunter assembles is quite the cross section of human values, genders and ethnicities. Dr.Stein and Jeffersan “Jax” Jackson (the two parts of Firestorm), Dr. Palmer (The Atom), Carter Hall and Keera Saunders (Hawkman and Hawkgirl), Sara Lance (White Canary), Mick Rory (Heatwave) and Leonard Snart (Captain Cold).

The season-spanning storyline focuses around saving the world from Vandal Savage by killing him, which can only be done by Hawkman and Hawkgirl, since their fates are ultimately interlinked. The rest of the team’s specific skills are required to make this possible. For former Time Master Rip Hunter the quest is a very personal one. He wants to avenge the murder of his son and wife, selling it to the team as a quest to save the earth and become “Legends”. His former employers -the Time Masters- consider him a rogue and try to stop him. Every episode Hunter tries to lead the team on a mission to find and eliminate Savage. Because he owns, or rather procured, a spaceship, he can track down Savage in both time and space, which leads to adventures set in several pasts and futures. In every episode they have to overcome adversaries, endure some bickering amongst the teammembers and one or two of the protagonists have some sort of emotional conundrum that needs to be solved.

The series is not much more than a platform for some old and new characters to be showcased. Since it is essentially the same villains every time, Savage can’t die and has been around since 1700 B.C. and the Time Masters are, well, Time Masters, the plot gets a bit boring after a while. I was close to giving up after the first four episodes. How often can you see the same rundown of introduction, small fight, introduction to a solution, inevitable failure because of communication/leadership/trust issues, major fight to safe the day, narrow escape with hardly any character development. But I persevered and what followed were some episodes that were clearly made to honour the Green Arrow and some classic movie genres: the western, a 50’s horror story, classic sci-fi and (cold) war movies. Getting the references made these more fun to watch and presumably also to make, there was more humour in them and they had a more fun feel to them. The episodes leading up to the finale brought about a few surprise plot changes and made me actually want to finish the season.

When I watch a movie or a series, I want to be made to think a little and be able to relate to the characters. This means clever scripts with real people in it. This series has nine protagonists in it. To give everyone a storyline with a proper arc is probably too much to ask. The writers clearly made an effort, but nine is just too much and the attempts get stuck in clichés about lost loves and helping each other. As for the scripts, I am well capable, as are most people that watch these shows I presume, to remember some of the past events. There is no need to keep repeating what happened earlier or what the characters specific assets or faults are. Please, leave some stuff to the imagination or just imply it. If necessary, explain later, but don’t explain beforehand what I’m about to see. I like a bit of a challenge, the only challenge here is turning a blind eye on the plotholes.

The art-direction is something I did like, even though the Waverider, the ship, looks like it was taken from an 80’s movie set. The clothes and the outdoor sets especially are nicely done. The DVD set has a no less then three special features on the art direction concentrating on the Wild West set and Jonah Hex (who makes a guest appearance), the Waverider and the challenges of creating accurate or plausible sets. Other extra’s on the DVD are a gag real and the 2015 Comic Con panel.
If you want to just watch your favourite heroes or villains at work and love their specific lines and mannerisms, you’ll probably enjoy the show. This goes also if you like fights and explosions or just like people to get burned or iced by Heatwave or Captain Cold or taken out by the White Canary (I get it, it’s quite satisfying). The time travel adds a nice touch, especially because the antagonists don’t change. Season two should be more diverse. Just don’t expect to be challenged much.

So many of the easter eggs and even more obvious links to the DC Universe elude me. You’ll have to forgive me for that.