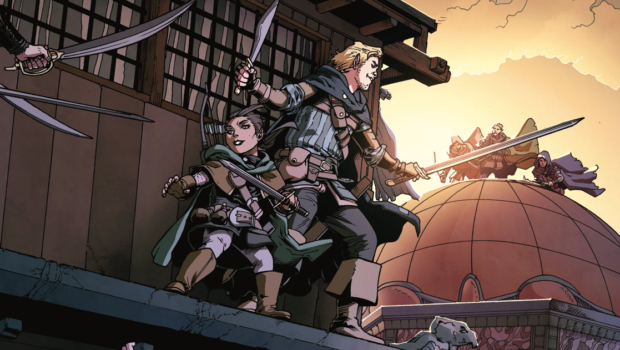 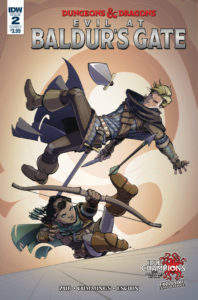 It may not be the most eagerly awaited comic book coming out every month, but the Baldur’s Gate comic is one of the rare opportunities for Dungeons & Dragons fans to get a bit of additional fiction thrown into their gaming.

If you’re as big a fan of Dungeons & Dragons as I am, you’ve probably also enjoyed the wealth of tie-in novels and comic books that Wizards of the Coast has released over the years. It’s not uncommon for a gaming, television or film franchise to develop a shared universe through other media, including novels and comic books. We’ve seen this with Star Wars, Supernatural, Doctor Who and so on. Way back in the ’80s, TSR (who then owned D&D) started releasing novels based on the world settings used for its gaming products. The Forgotten Realms was one of the most popular of those settings. Hundreds of novels and comic books have been released since then, chronicling the adventures of heroes residing in that world. That shared universe may not be as popular as, say, the Star Wars Expanded Universe (the old one, not the rebooted one), but it has a very faithful following. And although Wizards of the Coast does not seem to be pumping out novels and comics as much as it used to, fans can still expect to read a novel or two plus a comic book run every year or so.

The current run of comics revolves around a bunch of adventurers based in Baldur’s Gate, one of the key cities located on the Sword Coast of the Forgotten Realms. The Baldur’s Gate video game has been enjoying a renewal with the launch of an enhanced version of the game by Beamdog. The original Baldur’s Gate video game released by BioWare in the late ’90s was a hit, and it re-introduced us to two characters (originally created for the Dark Sun setting) that eventually would appear in the current comic book run: the seemingly addled ranger Minsc and Boo, his miniature giant space hamster companion (don’t ask. Just read the book). The Baldur’s Gate comic book is now in its fourth miniseries. It follows on the heels of the Tyranny of Dragons, the Shadows of the Vampire, and the Frost Giant’s Fury story arcs. Those comic book series were all tied into D&D tabletop gaming modules that came out since the 5th edition of D&D was released. The latest arc, Evil at Baldur’s Gate, even though it’s only in its second issue, seems to be breaking with the usual norm of tying-in with a gaming module by offering up solo adventures. Issue one gave us a very entertaining Minsc and Boo solo adventure. Issue 2 released this week featured the thieving duo of Krydle and Shandie. 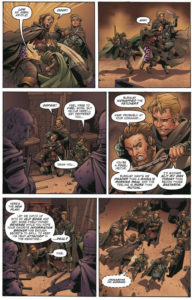 Issue 1 set the tone for the series with art on par with the previous miniseries and an interesting Minsc and Boo story arc. It felt more like a filler story, but it was still interesting to see Minsc and Boo strike out on their own. Issue 2 follows suite for the most part except for the art that is inconsistent at times. It’s a great story offering some insight into Krydle’s past, but also on the dynamics and friendship between him and Shandie. The art fails to capture the most action-filled moments, but overall, the book is a very satisfying D&D story. Jim Zubb has written a lot of these D&D comic books by now, and his work shows deep knowledge and even reverence for both D&D gaming and Forgotten Realms lore.

Most if not all D&D comic books share a common element: to tell the story of a group of adventurers and how they interact. This is to be expected, since the comic books are meant to parallel D&D gaming, where a diverse group of player characters strike out on an adventure. Character interactions are one of the most interesting things about those adventures, whether they are from tabletop role-playing games or comic books. It is rare in such action-driven comics to see genuine character development but starting with the original Advanced Dungeons & Dragons comic book run issued by DC back in 1988, endearing and even relatable character arcs and interactions have been a mainstay of D&D comics. Character development and interaction in D&D comics reached an apex in the Fell’s Five series by IDW in 2010. Fell’s Five was a milestone series. The art was awesome, the stories were well written, and the character interactions were pure gold. There have been many other series since then, including Neverwinter Tales starring Drizzt Do’Urden, the darker themed Cutter and a short series penned by Forgotten Realms creator Ed Greenwood himself, but Baldur’s Gate is the true child of the legacy DC series.

One of the reasons I like the D&D comic books so much is because they give me a chance to explore the Forgotten Realms. You can read about that world in the various game books (including the latest one, Sword Coast Adventurer’s Guide); you can roll a character in a game and go adventuring in that world from your tabletop; you can even play the video game or the online MMO, but nothing compares to being able to read stories in novel or comic book format that are set in that world. For a D&D gamer, finding out that there are also comics and novels set in The Forgotten Realms, is almost like reading The Hobbit and finding out there are more books set in Middle-Earth. The Forgotten Realms may arguably not be as popular or as well-known as Middle-Earth, but they are just as rich and immersive. Since the Realms were introduced by Ed Greenwood in the pages of Dragon Magazine back in 1979, it’s amazing to see that the Realms have not only stood the test of time, but also survived the stress of so many authors and game designers adding to them, modifying them, and in the opinion of certain fans, screwing around with them.

Some fans feel that the Sundering storyline has wrecked the Forgotten Realms. There may be some truth to that. Although Wizards of the Coast is still publishing novels as well as IDW-licensed comics set in the Realms, they are not as plentiful as they used to be. The 100-year time jump following the Sundering storyline has changed the Realms forever. I interviewed prolific D&D author and Drizzt Do’Urden creator R.A. Salvatore back in 2015 just before the release of Archmage. He said that the Sundering novels were an attempt to “bring joy back to the Realms.” And the various authors of those novels, Salvatore and Greenwood included, have endeavored to do that. They were very entertaining; so were the novels that followed. So far, we’ve seen a couple good ones by Greenwood, a very engrossing series by Erin M. Evans and quite a few more by Salvatore. Whether the latest crop of stories live up to the heydays of the Time of Troubles novels and the Crystal Shard trilogy depends on personal opinions, but I am still enjoying every single novel and comic book that is coming out.

Some may see the latest series of D&D comics as mere advertising to promote other gaming products. The close tie-ins with gaming modules and other D&D products may lend some credence to such claims. However, they do not prevent you from enjoying the stories or force you to buy other products. You can enjoy the game or the comic books independently without having to buy everything Wizards of the Coast puts out in stores.

In short, it’s good to be able to read Forgotten Realms comics and novels once again, and while the times of the Dark Elf trilogy and of the original Advanced Dungeons & Dragons comic book series by DC may appear to be ancient history, the 5th edition release of the game and the crop of novels and comics that came out of it are still very enjoyable. In closing, I am very, very grateful that Wizards of the Coast decided to reboot the franchise without erasing the Forgotten Realms lore (unlike the way Disney “erased” the Star Wars Expanded Universe from canon). I hate reboots because, for the most part, what comes out of them are pale imitations of the originals. The 100-year jump in time following the Sundering may have left a lot of the old favorite Forgotten Realms characters in the dust, but the Realms do get a fresh start while retaining all of their rich history. And the new Baldur’s Gate comics are a nice addition to it. 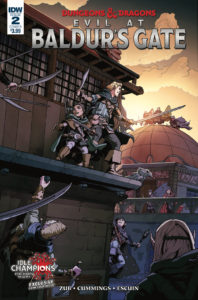