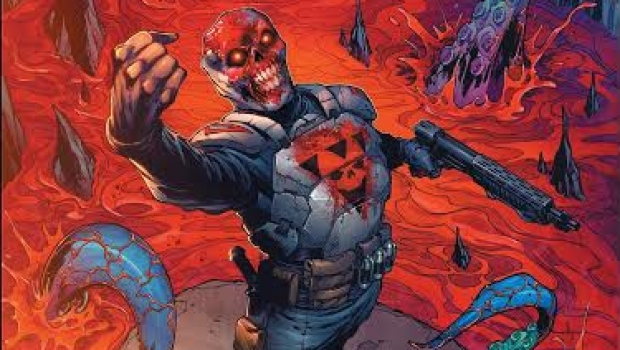 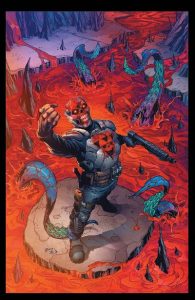 Rick Murphy is an average cop, just trying to start a family and live a decent life. But one day the rookie on beat stumbles onto the wrong case and that has life or death consequences for him and his world comes crashing to an end. Underground forces gave Murphy a second chance as Death Force if he doess their bidding for them. He goes along with the mission for a while, but when he stumbles he gains help from a computer hacker named Missy. Murphy uses his powers to resurrect his girlfriend against the Underworlds wishes and now we come to the final chapter in this tempestuous saga. I have enjoyed the series so far.

Rosete’s renderings are a good fit with Brusha’s words. There’s a battle between Death Force and a giant snake which was extremely well done and I enjoyed how the panels flowed smoothly to flesh out the final issue.
The Cover:

I liked this cover probably second best, behind the one that showed the huge dragon. It shows our antihero standing on a rock, surrounded by the lava flow that is hell fire in this series and raising his fist in defiance to the underworld leader. He’s holding a menacing looking weapon in the other hand. He’s in hell so he has nothing to lose.

A nice conclusion to a story that I really dug (sorry, my ‘70’s is showing) The underworld leader is disappointed in Death Force who doesn’t really care anymore since he’s already in hell and uses his powers in defiance to the creature that gave them to him. Will he get out of hell? Will he rot in hell or will he be used again as a mercenary by the underworld leader? The ending is left open for the possibility of a continuation, which most good comics do. There’s a little epilogue in the back that features the voodoo queen in a closing cameo, much like a Marvel movie would do after the credits roll in one of their films. This hints of a possibility of things to come. ***1/2