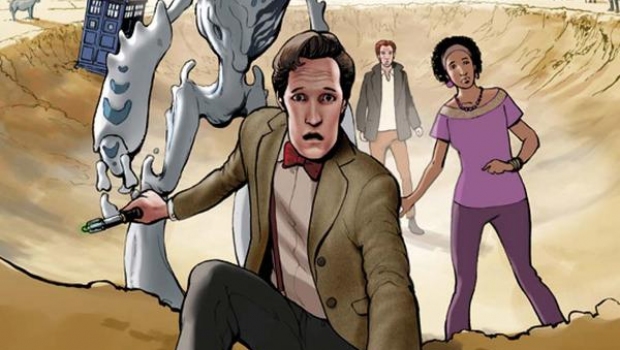 My first encounter with the good doctor was when Tom Baker played him back in the ’70’s. I was a teenager and immediately set out to catch as many of the previous incarnations as I could. Unfortunately the BBC’s habit of erasing older shows when they ran out of tape made it impossible to see the whole cannon, but I caught as many as I could through re-runs and eventually video tape.
The main players in this trade paperback include: Library assistant Alice Obiefune, Alice’s mother’s favorite musician: Jones and the shapeshifting alien called Arc (Autonomous Reasoning Center)
This encounter is just as much fun as any of the televised episodes if not more so. The good doctor encounters a being that is the sum of all fiction rolled up into some kind of living invisible creature. This creature is attempting to control us humans through it’s love of literature in a matrix like take over of mankind. Our hero gives this creature a kind of form through the shapeshifting Arc’s…what’s the polite word for, oh, I know, excrement. That’s right, Arc goes to the rest room to “Freshen up” and creates the body for our antagonist: Zzagnar the all conquering! Can the good doctor convince Zzagnar that what he’s doing is not good for him or the human race? Read on and find out.
All of this is just the beginning of a collection of stories that takes the good doctor to many places including another dimension, 1976 Berlin, Germany and Ancient Rome, among others. It’s a fun ride with adventure on every page. ****

The Eleventh Doctor’s bold new adventures continue, as the Doctor is confronted
by his greatest failure, Alice faces her darkest hour, the shapeshifting ARC’s origin
is revealed, and chameleonic pop star Jones reaches trancendence! All this, and
A Cyber-invasion of ancient Rome… and the final stand against the Talent Scout!

Collects Doctor Who: The Eleventh Doctor #11-15.