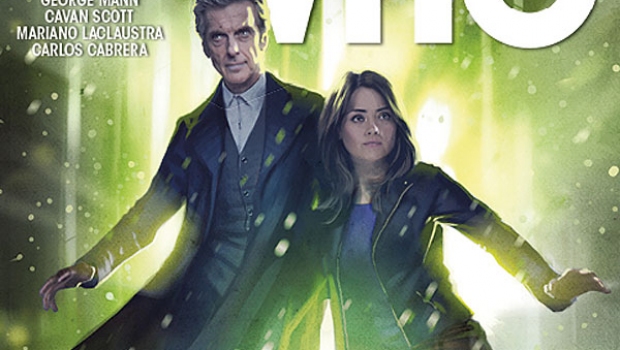 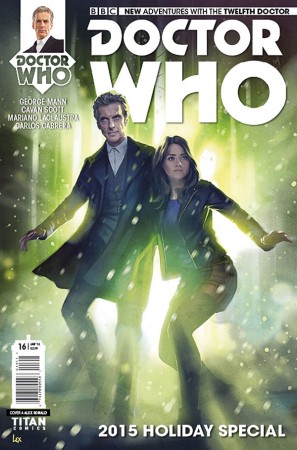 It’s Christmastime (and space) in the universe, and who better to celebrate the season with than that immortal time-traveling adventurer known as the Doctor and his sharp-witted companion Clara Oswald, as played, respectively, by actors Peter Capaldi and Jenna Coleman in the British sci-fi series Doctor Who?

[An aside before we get down to the review: For those of you who’ve been consistently reading Titan’s Twelfth Doctor series (which reboots with a new #1 after this issue), you might be saying, “Wait a minute. Issue 14 came out just last week, and this one is #16. Where did #15 go?” The answer is that, unfortunately, Titan has developed a reputation for being a bit lax about its publication dates, especially where Doctor Who comics seem to be concerned—Scott’s excellent “monthly” five-issue Ninth Doctor miniseries, for example, launched in April but didn’t wrap up until eight months later (last week, in fact), and the conclusion of their “weekly” summer event, the five-issue Doctor Who: The Four Doctors, was three weeks late. In terms of this latest scheduling snafu, it means that issue 16 got bumped up to take advantage of the holiday season, and The Twelfth Doctor #15—the conclusion of the “Hyperion Empire” four-part storyline—will now hit comic shops on December 23 (or so it said in an issue 14 ad; neither issue 15 nor 16 are listed on the Titan Web site to confirm this).

I love your Doctor Who comics, Titan, but at this point you’ve forced me to trade-wait on future series to avoid running into this ongoing frustration. Please try and do better.]

Okay, now that we’ve got the Internet scolding out of the way, what’s the Holiday Special about? Glad you asked!

While traveling through space and time, the Doctor and Clara receive an invitation to a holiday party—one hosted by his long-unseen granddaughter, Susan, and attended by a number of other companions from throughout the television series’ history. But the time travelers quickly realize they’ve walked into a trap devised by the Celestial Toymaker, a villain not seen since Doctor Who’s third season, in 1966 (played by actor Michael Gough, whom comic fans may remember as the faithful butler Alfred Pennyworth in the 1980s and ’90s Batman movies). As you’d expect, the Doctor and Clara are plunged into a life-or-death situation as they try to survive the Toymaker’s deadly games—but there’s a character-driven twist involved that shows there’s more to the Toymaker’s plans than just scenery-chewing villainy…

Storywise, Mann and Scott, as expected, know their Who and present a fast-paced, enjoyable yuletide tale of killer toys, battling immortals, and deadly games of Snakes and Ladders—with a special appearance by Germany’s anti–Santa Claus, the demonic Krampus! The Doctor here is as acerbic as his TV counterpart, and Clara gets her share of sarcastic one-liners, so fans of the series will have no trouble in recognizing the live-action characters they’ve come to know.

As for the art, LaClaustra’s pages are full of (cosmic) energy, and he’s nailed the likeness of Capaldi’s Twelfth Doctor to a T; unfortunately, his drawings of Coleman’s Clara tend to be off the mark more often than not, and limited to one or two facial expressions. Still, the overall look of the comic is great and, just like with Mann and Scott’s dialogue, TV fans will know they’re looking at the Doctor and Clara on first sight.

Bottom line? If you, or someone you know, are a fan of the long-running TV series, a fan of Peter Capaldi’s interpretation of the Doctor, or are going through Acute Clara Oswald Withdrawal, then pick up the 2015 Holiday Special—it’s the perfect stocking stuffer for Whovians of all ages.

Doctor Who: The Twelfth Doctor #16: The 2015 Holiday Special 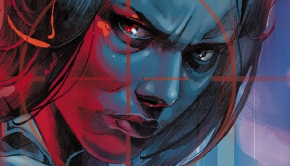