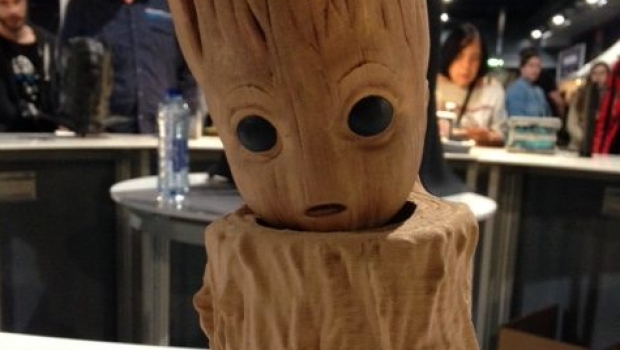 Cheese and the colour orange, a fun font and a badass lion make up the Dutch Comic Con logo. It’s a rather eclectic composition, trying to cater for a wide range of tastes. Much like the convention itself.

I’ve been to several cons, both international and national, for specific fandoms and generic ones, but I didn’t go to the DCC yet. The third edition of the Dutch Comic Con was held last weekend in Utrecht. Easy to reach by Public Transport and car. It spanned four halls with the latest in films, series, comics and games. The biggest hall was dedicated to merchandise, the smallest for games and the Middle Earth experience and the other two halls for the main stage and cosplay corner, and a hall for artists and studio’s. An extra bonus were the two cinema’s, showing new episodes of series.

The DCC logo is representative of what is going on at the con. A lot! It aims to cater for all the nooks and corners in fandom. Games, both boardgames and e-gaming, comics, series and films with an emphasize on new series or new seasons. Every hall had its own stage with very diverse talks, workshops, discussions, competitions going on. This made for a very lively atmosphere, and for a continuous stream of noise. The acoustics of the place are beyond bad, concrete all around makes for a huge echo chamber, which made it very hard to actually hear what is being said, both on the stages and especially on the floor. I start to see why many hotels have those awfull carpeting everywhere. Dedicated rooms for some of the talks may be a good option, although I see how you would lose some of the public that just wanders in on the talks now.

The setup allowed for wide pathways in the halls with some congestion prone bottlenecks between the halls. Once in the hall, there was generally plenty of room to move, look and participate. Artist alleys were set up in a way that allowed easy access. Although the con was well attended (32.000 visitors over the weekend), it never felt overcrowded, and queues were manageable.

I was pleasantly surprised by the dealer hall. Wide avenues with smaller sideways to make it easy to shop and not be swept away by a prevalent current of people. The dealers showed a wide variety of products, which makes shopping a lot more fun. I fell in love with the your original posters.

No con without cosplayers; from the adorable cardboardbox-turned-stormtrooper, Fez and lab-coat to the very elaborate World of Warcraft characters. I always love to see so many people making an effort. The part of DCC dedicated to cosplay featured some fanbases, workshops and cool 3-d printing stands. Let yourself be scanned and turned into a 3D Figurine or print your own props or costumeparts.

All in all, a fun day out in a relaxed atmosphere (just bring earplugs next time) with loads of stuff to see and do.