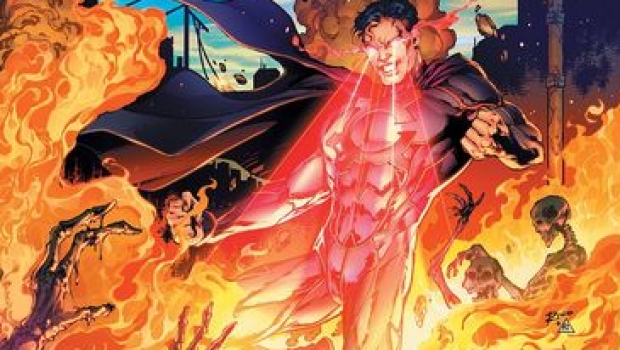 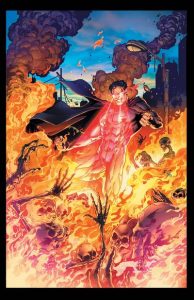 This issue opens with the speedster of this super villain team arrives just outside of Houston, Texas. He looks over the damage that was done. He’s brooding and grieving over what has happened to this area. He’s questioning what they’ve done to this planet as they are supposed to be gods. Chaos has destroyed the moon and now complete destruction and devastation are upon the Earth. It looks like mankind’s final moment of despair. But Derrick an the General are planning to counter the actions of these new “gods” even as mankind seems to be accepting their fate. I love the allusion to DC’s Crime Syndicate.

Joe Brusha brings us a different take on the idea of the Crime Syndicate, his characters have obvious counterparts to DC characters and I love it! One of my favorite moments in Avengers history is when they introduced the Squadron Supreme, which is basically marvel’s way of getting their team to fight the Justice League. Other comic book company’s have also given us their worlds take on different DC and Marvel characters. In this issue Brusha builds tension slowly, some of the new gods are expressing regret for Chaos wreck less take over of earth and it’s been revealed that they’ve done it before. The emotion that Brusha evokes reminds me of when the Silver Surfer finally recognized the frail humans of earth to be sentient creatures and did an about face on Galactus. That was another one of my favorite moments in the history of Marvel comics, and Brusha executes the same theme almost as well.

The team of J and Hill are in fine form as they helped to create characters that rival another comic book company and help to nail the imagery without being to evocative of the original (for copyright purposes, I’m sure,) the double splash page is extremely well done as our scarlet speedster reminisces about the chief god throwing a lightning bolt and turning one of his comrades into a deity. Then we’re taken to another world that was taken over for chaos. This comic is extremely bright for the dark theme it elicits. I also enjoy that type of story telling. it shows us some contrast. All in all, a fine chapter from a great creative team.

A frenzy of fired up destruction is the best way to describe this great cover. The Ultra-man knock off is using his heat vision to basically fry everything around him. A great introduction to what awaits the reader, and the front cover character looks enough like Superman to throw off fans of the man of steel, even if it’s only a brief second. DC fans might be tempted to buy this title, which is what Zenescope is going for, I’m sure. Great stuff.

As I said, the tension builds slowly in this issue but it leads to a rousing action packed climax that’s sure to wet the appetite of any superhero fan. The character arcs are well done as some of the new gods are experiencing a tinge of regret, while others are hell bent on conquering the Earth for Chaos. Derrick and the General are forming an attack plan of their own, no matter how hopeless it looks. The tensions build as this issue leads us to what appears to be a no win scenario. I can’t wait for issue #5 ***1/2