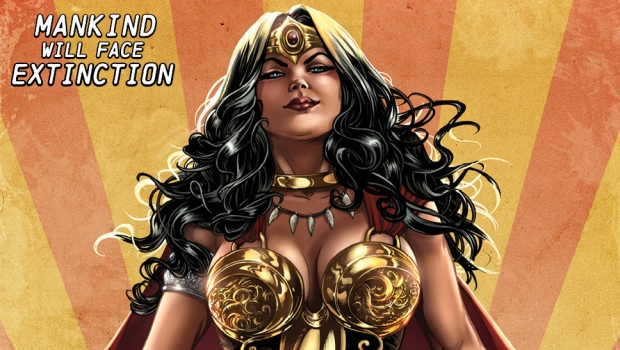 Enter: a villainous version of the Justice League. Of course, this isn’t the first time that’s happened. DC comics themselves created their own Crime Syndicate of America which operates on a parallel earth to its own and when Marvel Comic wanted their Avengers to fight the Justice League they created the Squadron Sinister, each character having their own counterparts to the JLA (Hyperion = Superman and so forth.) So, this isn’t anything new. In fact, ever since Comic books have existed they’ve been ripping each other off. When the Man of Steel first appeared in 1938 other companies immediately followed suit and gave us Shazam (original Captain Marvel,) The Sentry, Supreme, and DC itself ripped off their own character with the Samaritan. So, we’re not going to discuss the pros and cons of companies copying each other here, we’ll just discuss the story.

Joe Brusha opens this issue with two super powered beings causing chaos throughout New York city. Then a female super powered being is creating destruction in London. Other super powered beings are destroying lives and properties around the world in a non-stop onslaught of global proportions. The characters are obvious knock-offs of DC’s Justice League; Superman, the Flash, Wonder Woman and a sea-faring superpowered creature that looks like a cross between Aqua-man and Marvel’s Triton from the Inhumans. It’s a trade paperback collection of a six-issue series that they released recently, and it’s just in time for the release of the DCU Justice League movie. Such timing! Brusha has always been good at keeping us guessing and the first chapter makes us wonder if these beings are aliens or homogeneous to earth but with powers and abilities far beyond those of mortal men (sorry.) Our protagonist appears towards the end of chapter one, but he doesn’t seem to have any superpowers and it makes one wonder if they have any ability whatsoever to stop the destruction caused by these creatures. He shows up in the Nevada desert and enters what appears to be a government run laboratory of some kind. This is an awesome trade paperback. I’ve always loved amalgam type comics where the main characters are obviously imitative of certain other comics characters, as in the aforementioned Superman rip offs, Amalgam gave us Super Soldier. A cross between Superman and Captain America. It’s all done in fun, I’ve often wondered how far someone could take their rip off/homage before getting sued by the original publishers (In fact, DC successfully sued Fawcett for the Shazam/Captain Marvel character in the 1940’s) And this title is great stuff! Brusha delivers a true feeling of helplessness among those of us here on earth as these superpowered beings appear unstoppable! The creature called Chaos destroys the moon and sends the pieces crashing to earth. They are toying with us and, to coin a phrase, resistance is futile. The second chapter introduces more of our protagonists as they have all gathered in the Nevada desert to discuss what to do about this invasion. It’s a true page turner.

Several artists handle the artistic chores. Overall, they successfully convey a feeling of continuity between the chapters. One well rendered splash occurs at the end of chapter two (Eric J) as Zyana (The Wonder Woman knock off) unleashes a strange creature that she assures the others will “…Hunt those insects down.” Page 59 has another great splash as our heroes have transformed certain humans into super powered beings through project evolution. And we see them in training as they are about to try and defend our world against the intruders. On page 68, the panels become somewhat fragmented as the heroes approach danger, an effective way of showing how chaotic their situation has become. I won’t reveal much of the plot, suffice to say that by page 76 the humans see their first taste of success and then the panels go back to being even again. Great storytelling. Also, a nice gallery of Eric J’s art after the story concludes. I love this trade paperback.

One of the villainous “heroes” develops a conscious and causes the group of super villains to splinter. Will this lone crusader be enough to stand up to the might of Chaos? This is a great tale of the underdog fighting for what’s right and to gain their freedom. The characters are complex as some of them do what they think is right in the moment, even though the consequences are grave. Not everyone makes the right decisions on what to do, but we can see where they are coming from and understand why they’re doing what they do. By chapter five we discover something new about the traitor among the gods that we can relate to. The concluding chapter is god against god and sacrifices are inevitable. We also may not like the ending, but it’s a fitting finale to this story of power corrupting. **** (9.7 rating)