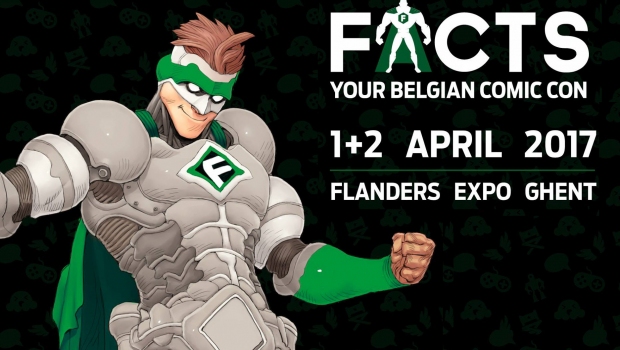 Where to start… My name is Kim and I can count the amount of conventions I’ve been to on one hand. Actually on two fingers to be precise and both one week part from each other, one being the Dutch Comic Con and the other FACTS. When my husband asked me to FACTS on the Friday afternoon, I was ecstatic!

If you’re looking for an in-depth review on the artists at FACTS, this might nót be the review for you. I’ll instead give you a glimpse in the mind of a comic con starter. *insert eerie music*

So let me quickly sum up the experience I had at the Dutch Comic Con (A small side step, I promise. A C4S review can be found here). This was my first ever comic con. It was the third edition and I feel utterly ashamed about missing the first two. And by all means, was I excited! I was looking forward to this day for weeks and getting together my Castiel outfit. (Please don’t judge) I was overwhelmed by all the sights and sounds and especially the costumes, feeling severely underdressed myself. I got my ‘dating for geeks’ album signed by Kenny Rubenis and stood in line for a picture on GameMania’s “Throne of games”. After several hours, I felt like a puppy who had been playing all day. Excited, tired, a complete sensory overload, but I couldn’t have been happier. 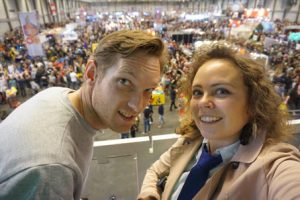 Fast forward to Friday afternoon. I had scrolled past some posts mentioning FACTS in Ghent on Facebook, but I had just been to the DCC so I didn’t give it much thought. And then I went to the website. I couldn’t believe the names which were going to be present at FACTS. My heart skipped a beat and I had a smile from ear to ear.

It was a 2.5 hour journey by car, which would’ve been less, if cars didn’t decide to crash into each other. Upon arrival, we stumbled onto a huge parking lot and were actually surprised to see people leaving already. We entered through the VIP/Press entrance, which I thought was quite exciting. Bags weren’t checked, although I heard it was a big issue at the main entrance. 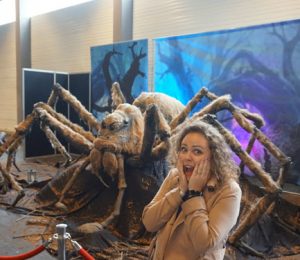 There were 6 halls in total; 1 hall with the entrance and the FACTS mascot guarding the gate. This hall led into the main hall which connected to 4 other halls. One hall contained the actors and comic book artists, signing away. Another hall had movie props, like the Mr. Beans car and Harry Potter’s acromantula and R2D2’s rolling around. Overall I felt very lost at first, but was very happy to have a floor plan with me and to have volunteers guide me along the way.

The main hall was the focal point of the con. Here I found Kenny again and had him sign another one of his comics. We also got tricked into buying dried fruit by an Asian lady who didn’t take no for an answer. There were many bathrooms, which needed to be paid for, mind you. The food here was very good and very well priced (except for the dried fruits).

Where DCC felt compact and crammed, FACTS felt huge. DCC had a Q&A session and cosplay competition on a stage near the entrance making it a bottleneck for incoming visitors and people passing from hall to hall. FACTS had a separate cosplay catwalk and a Q&A room, which could both be crowded as well, but the con in Flanders had something easy-going or dare I say ‘gezellig’.

In one of the halls, the Beast could be found. Now I’m not talking about the one looking for love in a weird Stockholm syndrome kind of fashion. I’m talking about the world’s largest inflatable obstacle course, which was 272 meters long. I won’t say I’m the fittest person out there, nor the laziest, but both my husband and I felt shattered after giving the Beast our all.

Though this experience was amazing, I couldn’t help shake the constant feeling of comparison, constantly comparing the DCC to FACTS. ‘Hey! I saw that last week. Wow! They were there last week as well. Hmmm this reminds me of last week.’
To be honest, I don’t think it matters which convention you go to, because both have the essentials to create a little piece of geeky heaven and to put a smile on your face.