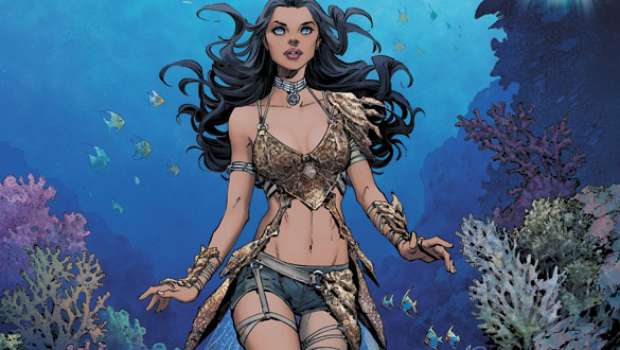 Ron Marz and Siya Oum taking the helm of the Fathom-franchise in its Volume 7 glory actually really feels like the 20th anniversary Aspen Matthews deserves. As title, mind you. Not as character, cause she is getting an all new threat in her newest adventure.

Where former writer Blake Northcott (for Volume 6) sublimely managed to bring the ‘mermaids’ to a more prominent (and social media aware) era, Ron Marz seems to bring back the Cold War in a most active fashion with Aspen’s brother (forever waterboy) Finn being kidnapped by the Russians, to fillet and tortured in order to eventually create their own army. At least, that is what #1 is giving me so far and that is all I have right now. But Ron Marz is bound to impress me, as his work on Witchblade bedazzled me time and time again.

This #1 is not impressing me storywise, yet though. I do love the way it is flowing, but there are a few minor quips I have. The Russians being the obvious bad-guys is one of them. The bragging of Finn’s minder. The “it is a national matter” where it obviously is much more, especially if you hear Aspen later addressing the planet as a whole. The Russian operative asking “are you Finn?” and her getting close enough to get to him. Also: if Okoro is coming to protect Aspen, why is he on his own, painfully ill-equipped and not even a match to the power Aspen herself has.

But let us overlook this for the sake of the franchise and for the faith I have in Marz and because the first issue really has a lovely flow to it. Like I said: minor quips.

And no offence, Mr. Marz. But the real reason I am so incredibly enthusiastic about this new adventure is the art…

When I reflect on my comic encounters with Michael Turner’s art, I always had this gut feeling when seeing his artwork. That lively, warm and gently feeling in the pit of my stomach when I first saw his art on Witchblade. That energizing excitement I got when I first read and smelled the crossover with Tomb Raider, after I send Dynamic Forces 5 $ from the Netherlands and they shipped me that book! The A0-version of it that was given to me by my departed friend Aart Zeeman. The song “funk soul brotha” that Chance put in my head forever and ever, which I play every week even because it reminds me of Turner and his legacy and the way the folks at Aspen Comics are keeping his spirit alive. It all gets to me, even after all these years.

Anyway, begone tears and emo-galore. I digress… Michael Turner, may he rest in peace.

Like I was saying, I got this feeling whenever I opened a new book with his artwork and the only other time I had this, was when Talent Caldwell took over art. Or Joe Benitez. Or Eric Basaldua. But that’s it!

Not to say that I am not a fan of other artists, like Cho, Budd Root, Michael Bair, Balent, Quitely, Gary Frank, Capullo, Amanda Conner, Silvestri, Terry Moore etcetera and they all make me feel stuff I am not going into right now.

Hell, there are even indy artists like Eliseu Gouveia that are giving me goosebumps, but that is art for you! It is all very subjective!

But Siya Oum and the coloring by Steigerwald… they made me feel like way back when. I liked Oum’s art before, but add water to the mix (so it seems) and the real magic begins anew for me! The way Aspen is coming out of the water, the way Tyler’s chin is drawn, the smirk on her face. The water-y sequences are for me what “Fathom” needs in every issue, so thanks Ron, for putting those in. That made the difference… or I should say, that makes me feel like back in the day!

I really am looking forward to the next issues, that is for sure!