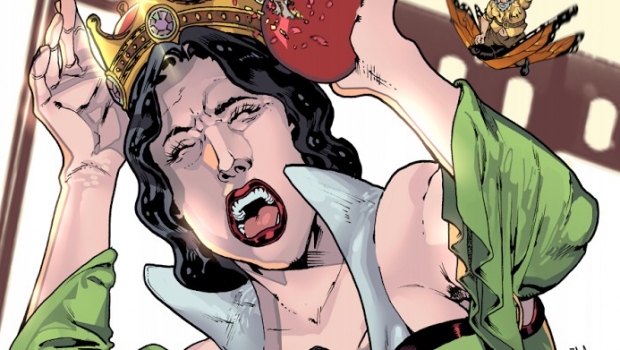 “We don’t hate zombies, but we really hate poetry!” – Redneck.

Here’s an anthology of horror stories with one of the creators of E-Man Nicola Cuti. The first outing is called Mutant on the Bounty it opens with log entries from Fleisher Yiddish, a Marine fleet is bargaining with the Tahitians to purchase some Bread Fruit trees to take back to the West Indies but according to Fleisher’s log, their captain didn’t have enough money to pay for the trees. A fight ensues and the Marines leave the Tahitian Island but not before a curse is put on them. The ship loses it’s way and many in the crew are losing their lives. Is this a result of the curse? The trees seem to take on a life of their own. Will the deaths continue? Are the strange goings on a result of the curse? Read on and find out! Incredibly realistic art makes this a good read.

Next we have the Un-dead Poets society which dares to ask the question: What if a Zombie got hold of a cell phone? As you may have guessed the creative teams tongues are planted firmly in their cheeks. The art is over the top and cartoony. Hiring Zombie labor may be cheap, but it is not the way to get the job done as our protagonist soon discovers.

Then we re-write a classic fairy tale with Snow White and the Seven Deadly Sins. As in the classic fairy tale the Huntsman can not kill Snow White so he let’s her live. In this version he gives her a pet Raven, Blackmore, to keep her company. When she stumbles on the old house that she thinks is abandoned, however, the dwarves finaly come home, only these aren’t your parents loveable little guys.

And now for something new! Up until now the issue has been in black and white but now we come to the first story that’s in living color. This tale begins with a film crew at work on a monster movie but has to wrap for the day due to rain. The director is visibly upset with the creator of the films animatronic robot so the robot’s creator works on the creation into the late night and the rain storm. Will the animatronic creature work right? Will it malfunction? gotta read it to find out.

Now it’s back to black and white for the James Bond parody: The Man with the Golden Fang. Can the man who’s licensed to, not just kill, but destroy take on a genetically altered vampire? Perhaps he should call Karl Vincent for assistance.

Next Story: The African Queen Bee. A beautiful girls hires a Mr. Walnut to take food and supplies to a native tribe along some dangerous rapids. A couple of mysterious shenanigans later and Mr. Walnut begins to wonder if he’s brought aboard a saint or a demon. When he checks the cargo of food and supplies there’s only one type of food, and it’s not exactly the healthiest food around. What kind of people are these?

And now we come to a story titled Valley of the Voo Doo dolls. Actress Darla Dawson has auditioned to be in a movie based on a steamy novel that’s a guaranteed block buster. The condescending bitch of a movie star is a shoe-in but Molly O’Brien, an unknown from Indiana wants the part. When a mysterious stranger tells her that she can still get the part Molly will do anything to get it. And we do mean anything!

The cover features characters from the James Bond parody The Man with the Golden Fang. The title antagonist who is a well kept debonair type of fellow, but don’t be fooled he’s every bit as dangerous as Sebastian Vasilis. His femme fatale is behind him. His castle is on fire and James Blood is poised for battle holding a cross bow with wooden stakes for weapons, for obvious reasons. A catchy cover that should sell a lot of comics.

If you like horror parodies of classic movies then this issue is right up your alley. The artists are well matched with the writers with just the right amount of realistic and cartoony styles. The artists succeed in depicting the characters as we would have imagined them. For the sincerest anthology collector, you don’t want to miss this one!