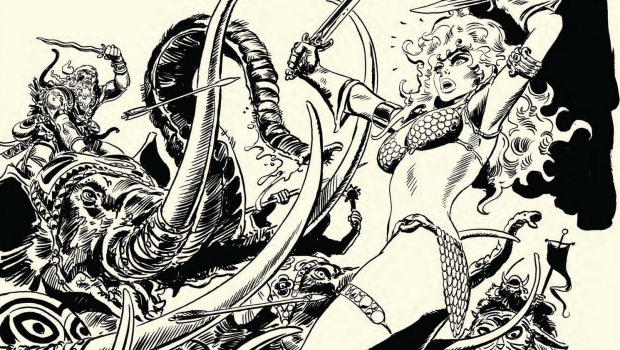 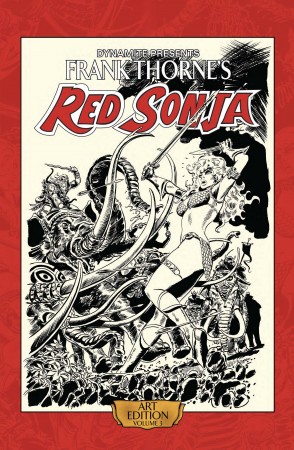 Hey, what do you know—this makes my fiftieth review for Comics for Sinners! Who would have ever expected that when I wrote my first review for C4S, back in June 2014, to give my opinion on Dynamite Entertainment’s relaunched Vampirella series, it would lead to this? Not me, I can tell you! But C4S’s head honcho, Richard Boom, liked what he saw in that Vampirella piece that was half review/half rant and asked if I’d be interested in doing more. Sure, I thought—after all, there can’t be that many bad-girl comics out there in these increasingly politically correct days. Boy, was I ever wrong!

Oh sure, occasionally I’ve broken with C4S’s focus on curvy action heroines—as in the case of my reviews for Scooby-Doo Team-Up, Afterlife with Archie, and Star Trek: Harlan Ellison’s The City on the Edge of Forever—but ever since that first review, publishers have been keeping me well supplied with bad-girl titles to write about. And on this special occasion, what better subject for a fiftieth review than a project by Frank Thorne, one of my all-time-favorite bad-girl artists? None better, say I!

As Peter Jackson proved with his epic films The Lord of the Rings and The Hobbit, trilogies are still all the rage with fantasy fans, so if height-challenged hobbits and grotesque orcs and psychotic Gollums can all have their day in the sun, why shouldn’t a pulchritudinous, chainmail bikini–wearing She-Devil With a Sword have her own trilogy—even if it’s just an oversized hardcover collection of classic artwork from her 1970s comic book appearances?

And so we have Dynamite Entertainment’s Frank Thorne’s Red Sonja Art Edition, Vol. 3, the conclusion of this trilogy that celebrates barbarian fantasy and good-girl art. With stories written by regular Sonja scribes Roy Thomas (Conan the Barbarian, Avengers, Wonder Woman, and a ton of other titles) and Clara Noto (The Savage Sword of Conan the Barbarian), Thorne gets to draw Sonja battling rampaging elephants, demons, centaurs, a bald-headed (and curvy) female archer, and a golden serpent that transforms into a beautiful woman (of course). Then she’s struck blind and carried off by a giant demon-bird.

In other words, for Sonja, it’s just another Tuesday in the Hyborean Age.

Thorne carries it all off with ease. His Sonja is always sexy, even when she’s standing still, but once she picks up her sword and charges into battle, there’s no doubt that Thorne enjoys turning her loose in battle scenes that rival any superhero’s fast-paced action sequences. Sonja ably proves time and again that she doesn’t need any man to protect her—if anything, the men in these stories all need to be protected from Sonja! But there’s one sour note to this final volume: Thorne never finished his last storyline.

In his introduction to this tome, Thomas states that he’s never figured out why Thorne left Sonja at the height of her popularity—especially when Thorne’s final issue, Red Sonja #11 (included in this volume) ended on a cliffhanger halfway through a four-part story—but thinks it all worked out well for Thorne in the end, with his creation of Sonja’s blond-haired, X-rated “cousin,” Ghita of Alizaar. (By the way, the concluding half of the Sonja four-parter—not included in this volume—wound up being drawn by legendary Conan the Barbarian artist John Buscema, with Joe Rubinstein and Al Milgrom on inks.) It’s a somewhat disappointing note on which to end the Sonja art trilogy—it would have been nice if Thorne had at least completed the story arc, so both he and Sonja could ride into the sunset—but it’s not as though he gave up scantily clad barbarian girls once he left Marvel.

Bottom line? Yes, these hardcover collections are expensive as hell, but if you’re a fan of Red Sonja, Thorne’s incredible artwork, or voluptuous heroines—or probably all three, if you’re a regular visitor to C4S—then you owe it to yourself to check out all three volumes of Frank Thorne’s Red Sonja Art Edition so you can stare in amazement at the linework of a true master of fantasy—and bad girl—art.

P.S. If you’re curious to know what I thought of the last collection that Dynamite published, then check out my review of Frank Thorne’s Red Sonja Art Edition, Vol. 2 from a few months ago.