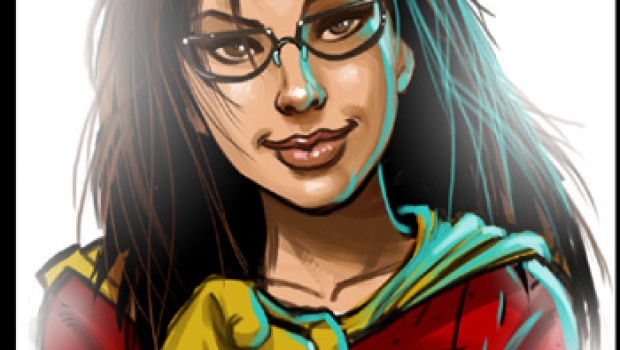 Geek-Girl is a story about Ruby Kaye who wins a pair of high-tech glasses in a game of strip poker and with those glasses she not only gains super-strength and the ability to fly, but a glitch in the programming of the glasses make her also super clumsy!

When first reading the synopsis I was intrigued, mostly because I happen to love the badgrrl/goodgrrl-genre in comics. And here is this fanboy named Sam Johnson who is not afraid of admitting he has that same tendency and even went on to start a comic named Geek-Girl and publishing house Fanbabes. From that moment on you just know that you are stepping into the “tongue-in-cheek meets tits & ass” world. At least it found a good home, where I am concerned!

You also enter into the world of a fanboy who has a drive to get this project up-and-running and it clearly shows with all the effort he has been putting into getting Geek-Girl into the face of the cyberspace, with bloggings, forum threads and appearances on Comicspace, Facebook, Myspace and a website to boot!

But all in all the most important question is the following: did the drive of Sam Johnson win the attention span of the reader with Geek-Girl #0? Well, that is totally up to the reader of course. On my side I acknowledge the strange and off-panel way to get a hold of the super-glasses, as well as the fact that a true answer as to why Ruby feels the need to become a superheroine at all. She is one of the ‘top breed’ party girls and that In-Crowd is not exactly known (as a general view that is) to be high-strung on saving something other then their nail polish, good looks and appearance, let alone fighting bad guys, saving other people and/or the world! I also see that this issue #0 lacks an artist that can make the “tongue-in-cheek meets tits & ass” feel come true.

An artist that however can indeed make that special feeling come true is the regular artist that starts with the full-color four-issue miniseries coming from Fanbabes soon in the form of Pablo Martinena, which can also be previewed in Geek-Girl #0. A good move of Fanbabes to add this preview of that upcoming issue to make sure that #1 can add to the excitement you get when reading #0. Excitement? Yes, indeed. The excitement is for the writing, the drive and the effective set-up of Ruby and friends despite the flaws. This is a fan project and that shows. But I have mentioned drive and that enthusiasm can also be found in reading the pages as well as through the hands of Sally J. Thompson (artist on GG #0), who made a good effort in getting the story out there and that is something commendable for sure.