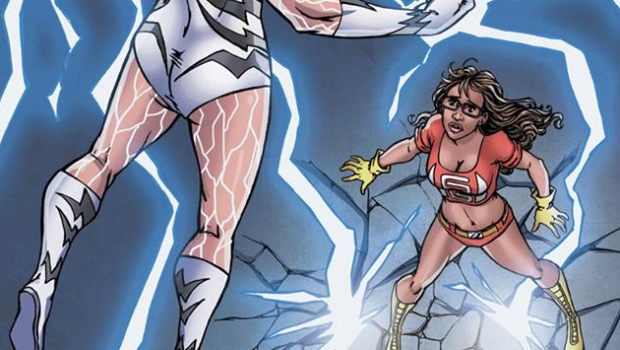 When ‘Little Miss Popular’ Ruby Kaye lands a pair of super-tech glasses in a game of Strip Poker, she’s granted flight, super-strength, and – due to a flaw in the glasses’ programming – super-klutziness! 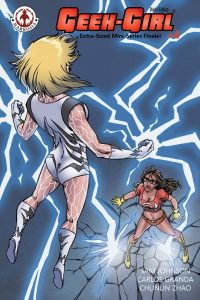 In #3 the mysterious super-villain Lightning Storm comes out of nowhere and hospitalized Maine’s long-term resident super-heroes, Neon Girl and Pit Bull. Neon Girl tasked new-hero-on-the-block Ruby Kaye a.k.a. Geek-Girl with finding and stopping her. As Lightning Storm’s threat escalates, it’s time for Ruby to deliver. Ready or not.

You can check out the Geek-Girl #4 teasers and soundtrack to the comic in here – which also links to getting all four issues of the Mini-Series if you haven’t picked them up yet!

Why would you want to pick up this series though?

Is it new? Refreshing? Good art? Great dialogue?
Is it teen drama but on an intelligent level?
Is it about repercussions on ones actions?
Is it about a story that challenges yet explains? Which makes you think yet feel entertained?

Add to this friendship and responsibilities, add to this the power of good relationships and battling ignorance… this story really has it all!

I do suggest to take all four of the comics out of the box at once for one solid read because it just reads best that way.

I do realize this is one crazy-written review, but I let it flow from my gut and will have Sam Johnson come over and write coherent, great comics!