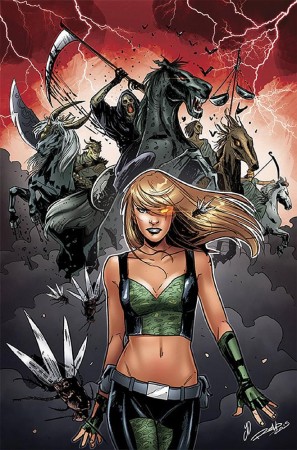 “…You’re still hanging on to something I lost a long time ago. Humanity” – Peter

This is it! The final issue of Robyn Hood. Chaos reigns. What would you do if your own father put a gun in your face? Who can you trust after that? How would it affect your judgment? The ultimate break down of society. This is a great finale that will leave series fans disappointed that it’s all coming to an end. And end it does, forcefully, violently, a no holds bar war between our heroes and the Cabal.

Robyn and her merry band must reach the La Gloria theatre to thwart the plans of the Cabal. But the Red Death, Ivory and other monsters make that task difficult. Lives were lost, hopes were dashed and the suffering is great but the cause is worthy because the Earth’s future depends on our heroes success. With their eyes and hearts focused on the ultimate prize, freedom, Robyn and her friends push on against the odds.

A very gut wrenching story that keeps the reader glued to each page. One can’t help but feel the sense of loss as main characters that were with the heroes from the beginning fall. Their ultimate forfeiture is for a noble cause and that makes the sense of loss even greater, and our respect for them grows. The reader will surely treasure this issue as there will be no more of Robyn Hood and her exploits…or will there? 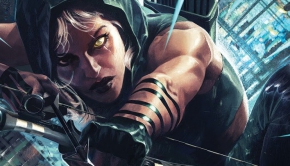