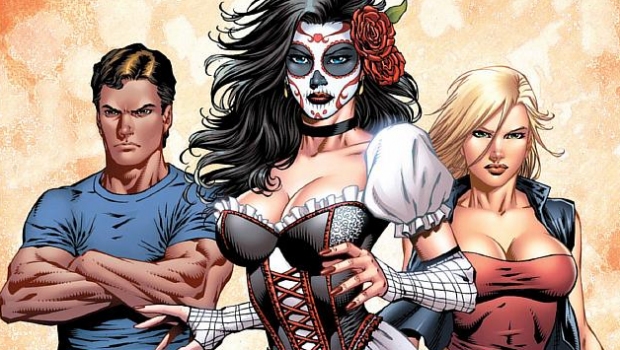 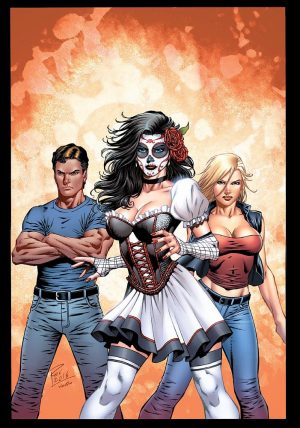 Sela and Shang have teamed up with their former foe Belinda to open a school for a few teenagers that are endowed with superior abilities. They are Highborn and Falsebloods who may one day be mankind’s only hope against deadly invaders from other realms. It’s X-men meets Guardians of the Galaxy.

Skye and Lance are ready to meet up with fellow students of Arcane Acre for the last attack on Bloody Bones, but they don’t know that there’s tension at the school. Ali’s been expelled for aiding in Skye’s escape and Hailey’s gone missing. Bloody Bone’s taking advantage of the situation and turns the city into a bunch of sleep walkers. Who march against Arcane acre.
This issue opens in a heavy snow storm where our protagonist and antagonist go at it with sword and ax. The warlord of Oz is in Pennsylvania because he was promised great power. He shrugs off his attacker and turns his back on her. Meanwhile Bloody Bones rants and raves like the lunatic he is about making the masses sleep in one massive dreamscape and joining their minds together for a very underhanded purpose that I won’t give away here. Suffice to say that his plan is totally nuts! His mental condition must be the result of not having an outer shell, at any rate he is a villain to contend with.

Pat Shands usual flair for giving us quirky characters has gone into triple overtime with this issue. He is having more fun with this title than any other’s I’ve read from him. It’s a no-holds-barred attack on the senses as he goes out of his way to top any other author with the zaniest character creations. The sleepwalkers, not quite Zombies, not quite human, are pushing themselves against the glamour, a type of force field, trying to break in. Great fun!

Christopher Jones is having just as much fun drawing these characters as Shands had in writing them. He aids the authors words and we get the feeling we’re in another realm. A medieval era that has gone by seems to jump forth. I almost expect King Author or Lancelot, or maybe even Prince Valiant to show up. Given the story line so far, they just might!

At the conclusion of this issue our heroes arrive as the sleepwalkers are about to break free. Are they in time to stop Bloody Bones plans? The Cheshire cat wants to eat a man that he says is pure evil. Will he be allowed? Next issue: Eighteen Forever Part TWO!