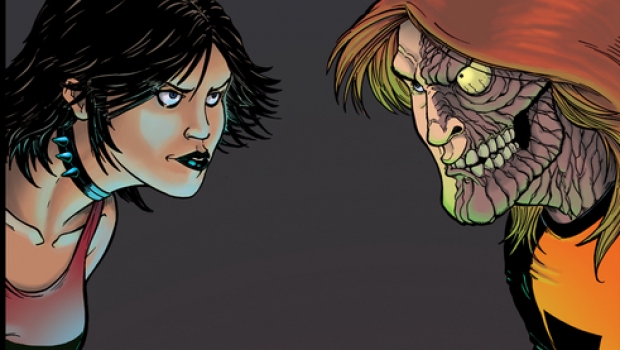 Halloween Man is a 21st Century ´Beauty & Beast’ story with Solomon Hitch as the Halloween Man and his lady love Lucy Chaplin as the world’s most glamorous mad scientist.

Together they have encountered many baddies and not only the world but also themselves and their love came out better after every adventure together.

In the HACKOWEEN special the monster-slasher team of Cassie Hack and Vlad (characters created by Tim Seeley) are put in the mix as Cassie and Vlad are talked into travelling to another dimension to stop Halloween Man, not realizing Solomon actually is the good guy in these stories, despite appearances.

Short story: a huge fight follows, Solomon stays cool AND undead, Cassie cools off eventually and the band together to stop the tentacle monster from destroying everything good they stand for!

This story is just filled with cheesecake, fun dialogue, cracking one-liners, ridiculous self-indulging fun characters and pure love as well. Creator Drew Edwards has made sure this crossover stays on track AND is as tasty as can be and aided with the art of David Baldéon (with smooth inks and colors) this story is a HAVE TO HAVE for all the good reasons!

EXTRA to this HACKOWEEN 70-pager is also the story called SOLOMON X, which is done in a completely different art style. I love changing art teams on various stories, personally and to see Sergio Calvet take Lucy and Solomon and pit them against The Elder (tentacle monster from Hackoween) as well as introducing a new mystery fighter to come after Solomon…. it makes me happy!

Creator/writer Drew Edwards takes insane characters and situations and makes sure the reader will fall instantly in love and shock&awe and thát dear readers, is the true magic that is comics! I will say it again and again, if you can reach an audience, then art is life itself!

You can score this beauty of a comic in a few different ways:

Digitally at Comixology: https://www.comixology.com/Halloween-Man-vs-Hack-Slash-Special-1/digital-comic/82904
Order the Hack/Slash Volume 8: Super Sidekick Sleepover Slaughter or the Hack/Slash Omnibus Vol. 3 online or at your local dealer.