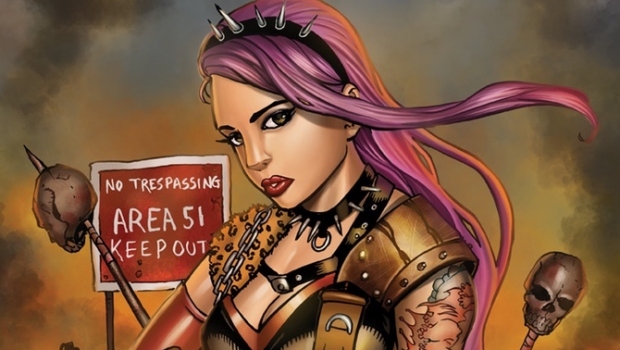 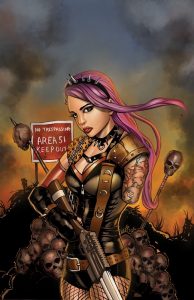 This has kickass written all over it!!

When Everette Hartsoe (Razor, Curse of Sleeping Beauty) was first brought to my attention, it already had me with the logo and the name. Hartsoe has a tendency to bring a project to live that has the UMPH from the start and with his character-driven strong-female-lead stories certainly not much is left to be desired.

With his new Kickstarter Project “HELL RIOT #0- Zombie Hunter X EDITION” he does what he does best: monsters, mayhem and babes!

The synopsis starts out with a nice mix of despair and horror:

The New World Order has slowly and patiently been building something diabolical.

Behind the thin veil of reality, humans are merged with cybernetics. Demons and monsters are brought through the fabric of the multi-verse. All are trained to become weapons of mass destruction through project HELL RIOT.

And for his Kickstarter he adds a 10-Bonus story ZOMBIE HUNTER X which “takes us on a journey through the not-too-distant future of a rapid spreading cannibal virus.” This is linked to Hartsoe’s other project and it also has some fiesty ladies in the lead!

This is the 1st new comic title of 2017 from Hartsoe’s new comic book company EVOLUTIONARY COMICS.

HELL RIOT was created and written by Everette Hartsoe and illustrated by Nestor Ruiz with colors by Nasir Ahmad and lettering by Warren Montgomery.

HELL RIOT starts out with explosions, gunfire, dead bodies and bodacious babes as our anti-hero Tera is bartending her lovely looks to some low-lifes until Area51-goons come in and shoot up the place. Before Tera Robins understands the gravity of the situation, she succumbs to the “special treatment” she was given and with her new-found strength she makes sure she says her piece!

During the rest of the comic, Hartsoe sets out to establish more about Project Hell Riot in order to get the reader all antsy and he sure succeeds in just thát!

This is a great start to a dynamite 4-issue miniseries and especially if the artists gets more time to get his groove on, this debut to EVOLUTIONARY COMICS will turn out to be a great 2017-year-starter!

I can only say to head on over to www.hellriot.com and check out more art and how to get a really fine indy-comic. Stop looking at only the superhero-comics because there is so much fun in Indy-LaLaLand!