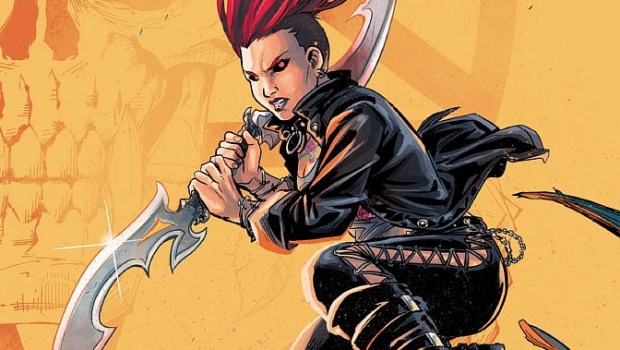 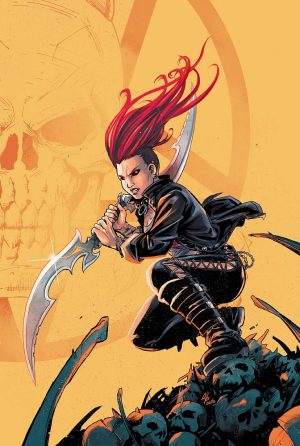 “A nagging thought rises in the back of my mind: You don’t belong anywhere.” – Angelica.

In previous issues Van Helsing and Marion attempted to stop the resurrection of Morgana by a group of modern day night club sorcerers. They succeed, sort of. Instead of Morgana Hades daughter Angelica is resurrected and she is a vampire. She winds up running rampant through New York City and Olaf with his gang of vampire junkies is hot on her trail.

Our story opens with Olaf in a major war time battle centuries ago. Then we cut to present day. Olaf leaves his vampire friends behind and goes after Angelica. They clash in a brief skirmish. Once Angelica realizes that she can’t defeat Olaf she reluctantly agrees to follow him. We also see the significance of that age old battle at the beginning of this issue. A big reveal takes place in the relationship between Hades and Olaf. A great set up for what is to come.

Pat Shand is his usual reliable self in crafting an intricate story that involves deception, a questioning of loyalties and a ton of action. The feud between daughter and father escalates to epic proportions. Van Helsing is still blindly in love with Hades. She explains that she didn’t want to resurrect his daughter, only to communicate with her from beyond. Hades doesn’t want to hear anything she has to say. Will the couple reconcile? Old wounds run deep.

Vincenzo Ricardo once again delivers top notch work. Whether he is taking us to the medieval dark ages or rendering a gritty New York city back alley scene. He’s able to transport the reader to either time with ease. His vampires can blend in with humans quite easily. A person in that universe would not realize a vampire was on their trail until it was too late. The artistic team of Shand/Ricardo is one of the best.

The cover is an incredible picture of Hades leaping into action amidst a snowy wooded background. Fierce, determined and ready to take on all comers. The promise of a battle royal from hell awaits the reader and should draw any fan of horror comics into it’s spell.

By the conclusion of this issue we see a mess of a situation and Hades feels betrayed by all sides. Angelica is trapped in a cell with another female prisoner. She talks of escape but is she friend or foe? The murder, madness and mayhem escalates and the next issue promises even more chills than this one. ***1/2