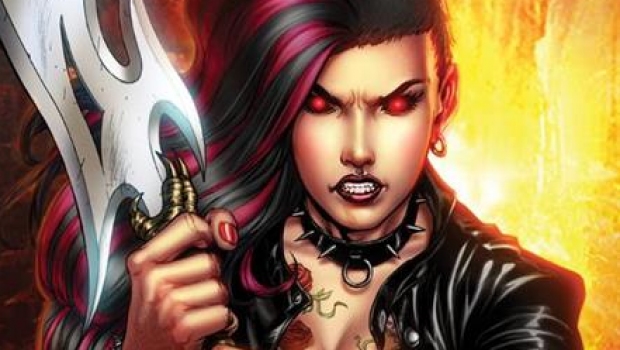 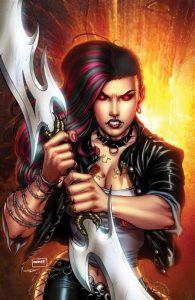 “New York City may be the only place where a girl can walk down the street covered in blood, completely unnoticed.” – Hellchild.

Our favorite divine vampire is back! This issue opens with a homeless man who was hustling money in front of a store being invited to restaurant by a seemingly good Samaritan, only to be beaten to death by said Samaritan after they eat. I like the shock value of this introduction as we’re left to wonder why the stranger invited this poor soul to dinner in the first place if he was just going to kill him? Then we cut to Our anti-hero, the Hellchild, as she engages in a wrestling match with an undefeated monster that’s called Azazel. This issue sets us up to see that the daughter of Hades is one bad-ass!

Pat Shand breathes invigorating life to his fearless female creation. I love how he sets the reader up with a scenario and we think we know what’s coming but in all reality, we don’t see the turn in the road that’s ahead. Whether it’s showing us how vampires feed or how a vampire can help a junkie with a single bite. Shand brings us into the world of the Hellchild, a fish that’s definitely out of water, and gets the reader to understand where this anti-hero is coming from. It’s Stranger in a Strange Land meets Hellraiser. The world of the Hellchild is a world she never made.

Renzo Rodriguez’ art is a fitting companion to the unique world that Shand has created, bringing hell to earth in a way no other comic book has. One of my favorite shots in the book is when we see Angelica walking through New York, covered in blood, then taking a bite out of crime, and no one notices. This New York is populated with human beings that have a cold indifference to their surroundings. And there is nowhere else on earth that Hellchild could live and be ignored so thoroughly.

Piercing red eyes draw us into this issue. Angelica is standing with weapon in hand, just waiting for us unsuspecting readers to pick up this issue. Her look says enter my world but don’t mess with me. She’s wearing a leather jacket with a tank top and black leather pants, looking like she just stepped out of a punk rock video. Her right arm is wrapped in barbed wire. The flames of hell are behind her and she’s ready for action!

This is the first issue of a five issue miniseries and Shand brings us back into the world of Hellchild with a bang. After Angelica makes short work of another underworld champion, the legion of upset demons is intent on taking her out themselves. However, they are in for a surprise that they hadn’t expected. A mysterious demon arrives with three demonic dogs. Her appearance leaves Hellchild without an occupation, but not for long as the mysterious lady hands Angelica her card. Just when we thought we’d forgotten about the good Samaritan at the beginning of this issue, he’s back. What is his connection to this whole situation? To be continued!
Hellchild the Unholy is a must read for all fans of horror/action stories. ***1/2.