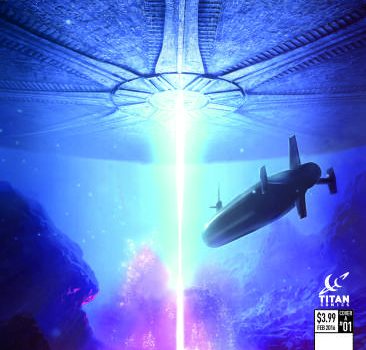 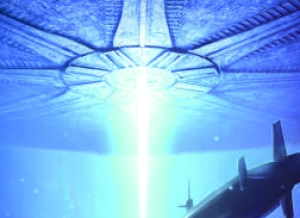 Our hero’s were elated when the global armed forces defeated the alien invasion from ID4. What they didn’t notice, however, was an alien vessel that was different from the rest break away and land under the ocean. When our armed forces finally realized it’s existence, they sent out a top secret team to investigate. Captain Joshua Adams have discovered some weapons that are not of this world. Their orders are to bring back an alien for study so our heroes return to the submarine with an alien cadaver. This causes tension among the civilian crew which has transported them to the site of the wrecked vessel.

Victor Gischler mounts the tension immediately from page one as the crew of the submarine are queasy and express their misgivings about the marines unwelcome deceased visitor. They rightly point out that it is unknown if the creature might spread any kind of disease or blood borne pathogen. The rift between the marine crew and the submarine crew deepens.

Alex Shibao keeps us underwater for most of this issue as the crew continues to investigate the alien ship. His art compliments the story as we see the characters move warily towards the alien ship . A few surprises await our crew and Shibao gives each character the right mood of caution then shock. His underwater pacing works well and I feel the way he handles these panels is one reason he was hired for this series.

The cover is a brilliant blue and gives the reader the perfect feel for what to expect in this waterlogged issue. If one isn’t careful one could find oneself getting sea sick. We see the crews sub on the ocean floor in front of the missing alien vessel with a school of fish passing by. To be honest the first thing I thought of when I saw the cover was the Cetacean from the old Man From Atlantis television series. The cover sets up the suspense for what’s between these pages for the reader.

The conclusion of this issue sees our marines taking on the chore of destroying the alien vessel. Given the problems our armed forces have had in destroying the ships this promises to be no easy task and will put several of the warriors in harms way. Will the crew be able to destroy the alien vessel and will they all make it back to the submarine alive and unharmed?

Read on to find out. Definitely a taut suspense filled issue. ***
Independence Day #2