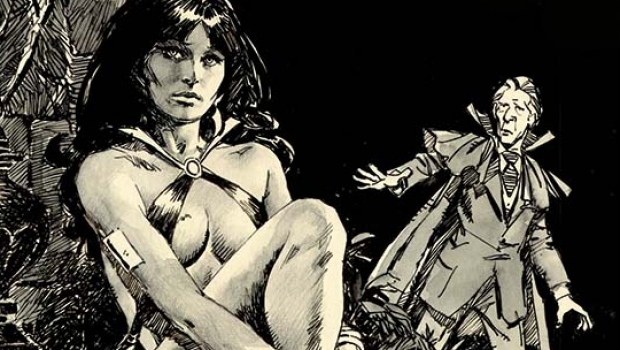 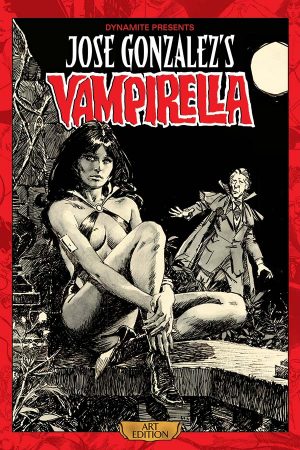 Now here’s a book not to be missed by regular visitors of Comics for Sinners.

Although it was Forrest J Ackerman—co-creator of Vampirella and the creator/editor of the horror-movie magazine Famous Monsters of Filmland—who scripted Vampi’s first jokey appearances, it was legendary writer/artist Archie Goodwin (Star Wars, Manhunter, Iron Man) who set the dramatic tone for the Vampirella that readers came to know, introducing such concepts as Vampi’s comedic sidekick, the often-inebriated stage magician Mordecai Pendragon; her love interest, Adam Van Helsing, and his blind-but-still-lethal vampire-hunting father, Conrad; the blood-substitute serum that allowed her to slake her thirst instead of killing innocent victims; and, most important, the Cult of Chaos: an Elder God–worshipping religious organization that was heavily influenced by author H.P. Lovecraft’s Cthulhu Mythos.

But what really captured readers’ attention was the incredible good-girl art style of Spanish sensation Jose Gonzalez, hired by publisher James Warren to replace original series artist Tom Sutton (who went on to a successful career of his own at such publishers as Marvel, DC, and Charlton). Gonzalez made his debut in Vampirella #12’s Goodwin-scripted “Death’s Dark Angel” and immediately set the high bar for Vampi artists to follow.

Just how high? The answer is found in the pages of Jose Gonzalez’s Vampirella: Art Edition, a 152-page master class in illustration set to be released on May 25 from Dynamite Entertainment. In it you’ll find full-size reproductions of Gonzalez’s black-and-white art for the following stories:

Not every story is a winner here—no writer ever really came close to matching Goodwin’s inventiveness on the series—but Gonzalez finds a way to make each of them memorable in his incredible style. Beautiful women, handsomely rugged men, lush backgrounds, lighting effects, ink washes—Gonzalez brought all his incredible talents to these stories (and more), and it’s something that should not be missed.

Bottom line? Yes, at $150.00 it’s an expensive book (what artist’s edition isn’t?), but for old-school Vampirella fans, admirers of bad-girl art, and lovers of classic comic art created by a master illustrator, Jose Gonzalez’s Vampirella: Art Edition is really something that should be in your collection.