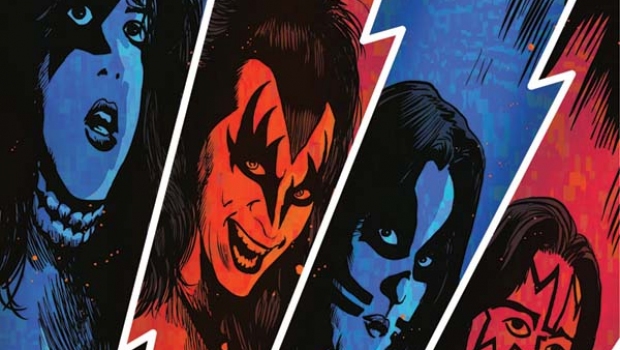 The story takes place 468 years after the great war. What’s left of the human race lives comfortably in Blackwell, which is an underground Metropolis. 4 teens begin to question their reality and discover things about their past. The secrets that are revealed will rock their world! The story opens with what appears to be a town meeting and the locals are questioning whether or not they can return to the surface. The four teens find a map which leads them on quite a journey.

I’m ecstatic! Kiss is the band that got me into rock and roll as a kid. They made music come alive (if you’ll forgive the pun) for me and they are my ultimate favorite band. I also love comic books and two of my favorites in the medium (Chu and Baal) are working on this one! It doesn’t get any better than this for me. Chu leads us on a maze that four teens are taking to find out the secret of the surface world, which has been off limits for many centuries. Is it really still contaminated and uninhabitable or are the cities council people wanting to prevent the townsfolk from leaving for a different, possibly sinister reason?

Kewber Baal is, as usual, taking us on a wild trip. The four Kiss Symbols Demon, Starchild, Space Ace and the Cat are all over the town of Blackwell and Baal paints the town as a utopia that most people are content to live in, except our protagonists. When we approach the surface world we get our first glimpse of the band members, albeit painted on the walls of what appears to be an abandoned Subway. I love how Baal renders the monastery, all the imagery appears to be from Music from the Elder. Which is a risky move to say the least since that was Kiss first commercial failure and lead to what Rock historians describe as their unfocused period. Baal’s panels are confident and lead the reader to a conclusion which will make you yearn for the next issue.

A fun beginning to what could be a great post-apocalyptic tale. It’s Logan’s Run Meets Future World as our protagonists, the teenagers, including twins Noe and Eran plus Alex and Adi, are bored with their lives and seek adventure. And it’s Adventure they find when they stumble upon the exit to their world and reach the surface thanks to an old map. The surface world is plastered with Kiss references the first bit of graffiti they come across is the word Kiss. One gets the distinct idea that this story is the story that would have been The Elder, if that movie had ever been made. The first thing that we read in this title is the lyrics to A World without Heroes. And the imagery is clearly evocative of that album. A great start to what could be a fun Kiss story. ***1/2