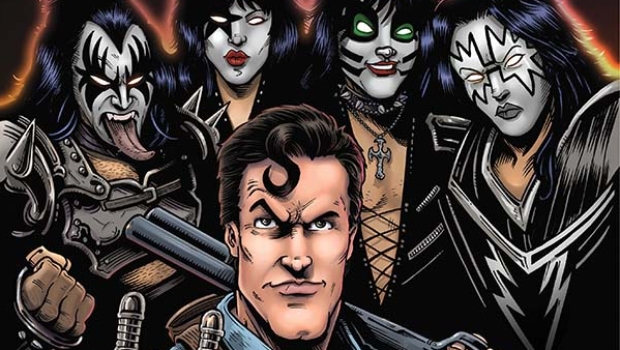 “…You figure that out from listening to your records backwards or something?” – Security Guard.

Our story opens at the Pontiac Silverdome in Michigan, 1979. Kiss is beginning another concert. Some cult members are watching in the rafters and they are not happy. A battle ensues after the show is over and it takes place on stage to a rousing audience that thinks its part of the show!

Chad Bowers and Chris Simms waste no time bringing our heroes into the thick of things. It’s an action-packed opening that promises to deliver on the thrills and chills that only a follower of Ash Williams can appreciate. It seems that the rock band disappeared after that concert and two years later our female protagonist seeks the help of Ash Williams, who’s in a hospital. The cult members track her down and the fun really begins! Great stuff includes the Kiss concert and knock down drag out with the cult and Julie’s trying to convince Ash, who doesn’t remember much, that he’s the fulfillment of an ancient prophecy.

Ruairi Coleman Captures the feel of a Kiss concert incredibly well and you can almost feel the vibrations as the Kings of the Night Time World rock out in their prime. Highlights this issue include the demonic look of the cult members who are decked out in robes and their own face paint to counter the Flaming Youth. Also, the splash which features Kiss leaping into action and using their individual powers.

Everything but the kitchen sink is thrown into this issue as the story sets up Ash… Well, I don’t want to give away too much, but some familiar faces appear to fans of the Evil Dead franchise and they will not be disappointed with this opening issue to what is sure to be a fantastic tale of supernatural sorcery. I highly recommend this issue to fans and non-fans alike. If you’ve never read a Kiss or Evil Dead, Army of Darkness comic book, this one is a good introduction to both franchises. **** (8.9 rating)