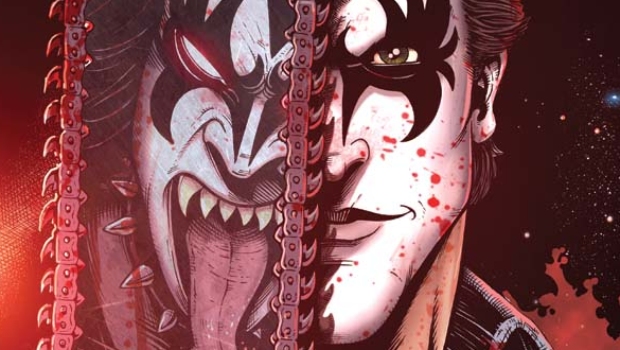 This issue opens with Ash enslaved. A fellow slave invokes his name as a Deadite threatens them, letting said Deadite know that Ash knows no fear, however, the look on Ashe’s face would say otherwise. And now we get into the heart of this story. 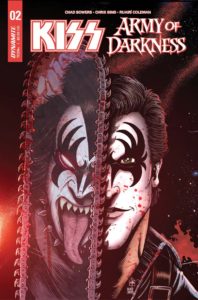 Chad Bowers and Chris Simms know how to bring these franchises together as Ash contemplates a bleak fate of complete slavery Can our favorite make-up clad rock stars pull Ash’s fat out of the fire? Bowers and Simms take our heroes on a roller coaster ride through time and bring them to the brink of despair! Great stuff includes Ash apparently being turned into a Deadite and Ash arguing with the kings of the night time world over what might have happened had they not disappeared on the night he was supposed to see them in concert.

Ruari Coleman brings us some great imagery as Ash wakes up in a time long past. His version of the Kiss warriors is spot on to the real musicians and he gives each character the proper attitude we’ve come to know and love about these guys. Highlights include the flaming youth doing battle with Deadites and the splash page with Gene, Paul, Ace and Peter arriving to save the day.

This chapter is pretty good with Ash finally coming face to face with his rock and roll heroes and trying to figure out what to do about being lost in time. I enjoyed this chapter and the cliff hanger leaves me wanting more! I can’t wait for the next issue. *** (8.2 rating)