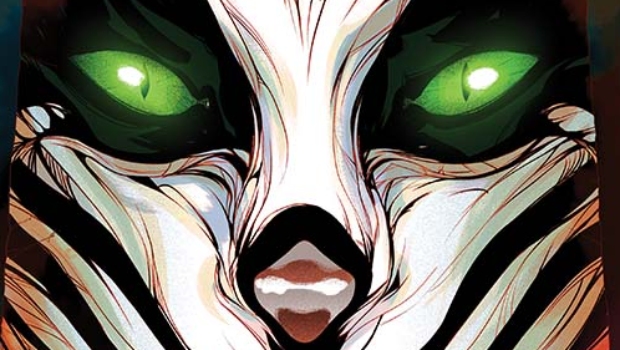 This issue opens with a stranger that looks suspiciously like Gene Simmons from the rear posting flyers on telephone polls in a small town. One of the towns young boys runs up to see what the flyer is all about and it turns out to be a poster for a Kiss (Knight’s in Sheila’s Service) concert. Our heroes are riding the countryside displaying posters of a concert that as many as can need to attend.

The Creative Team: Chad and Chris bring this story to new depths as Ash, in his own version of the Kiss make-up, rides along with the King’s of the Night Time World, in hopes of discovering a way to rid the earth of a new Deadite threat. The group faces another group that would be heroes and it’s difficult for the villagers to know who they should follow, good work at keeping us guessing from these two as we delve deeper into the mystery of why Kiss was kidnapped in the first place. Great stuff includes the confrontation between William and Sheila “…She’ll only make you cry.” And the revelation of who “…the promised one…” is!

Ruairi Coleman does a great job of rendering the Kiss army and Ash himself in a title that’s sure to please fans of both. The cemetery setting is slightly unsettling, and the artist helps bring that feeling of dread as the villagers must decide who to follow. Highlights include the Kiss concert montage and the arrival of the Deadite army.

Hold on to your guitar picks! It’s time for a hot jam with the hottest band in the land with a touch of evil from the Necronomicon and a compromised Ash who doesn’t know weather or not to trust his rock and roll idols. We finally see the Deadite army in action and the Kiss army prepares for battle but… to be continued!