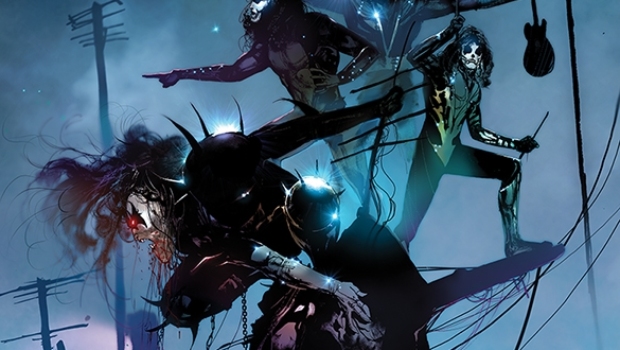 Is this really the end of the road? For kISS tours and comics? At least Amy Chu is back. I didn’t dislike Blood and Stardust. But it really wasn’t much of a Kiss comic. Can Amy Chu send our make-up clad rockers out with a bang? She’s sure going to try.

Amy Chu is a reliable force in the world of comics and this one opens with a lot of promise. Our anti-hero, Jay, is awakened by his girlfriend, Kimiko. She’s giving him holy hell because he slept all day and forgot to pick her up. Apparently, this was the last straw and she’s breaking up with him. As the day progresses, he loses his job for constant tardiness and it only gets worse from there. Jay is a slacker who is in desperate need of growing up. Kind of reminds me of Bill Murray’s character in Stripes. It’s kind of hard to invest in Jay because of his attitude, but Chu brings the delinquent a kind of charm nonetheless and we wind up rooting for him. Where he ends up is a vast wasteland and I’m not talking about television. I won’t give it away here but let’s just say it’s seemingly a land of no return. His path crosses with a girl named Mania who is his guide through the wasteland. What will keep you wanting more is the idea that Jay has nowhere to go but up. He must accept his destiny and accomplish the mission set before him. We want to see him redeem his soul and take responsibility for his actions. The scene where he meets Mania’s “Dad” is horrific and humorous at the same time. The chemistry between Mania and Jay works and we root for these characters to get together by the end of the issue. Great stuff includes Jay’s slow realization of where he winds up and the meeting between Jay and Mania’s father.

Edu Menna brings a certain panache to his renderings of the Kings of the Nighttime world and he draws them in a more realistic light than most of the recent issues that feature Kiss. It’s kind of refreshing to see them look like their actual selves then the four hulks. Menna’s style is laid back but down to earth, yet he gets the job done with aplomb. Highlights include the splash page of the wasteland and Gene Simmons attack on Mania’s father.

After Blood and Stardust and with the End of the road Tour, I was afraid that Kiss comics would not go out with the same bang as Kiss concerts. But Dynamite brought back a reliable writer on this series and the art is realistic and sensible. Again, my chief gripe is that Kiss is barely in this issue, but the set up has a lot of promise and I believe this team can deliver a solid knock out with the next issue. ***1/2 (8.7 rating)