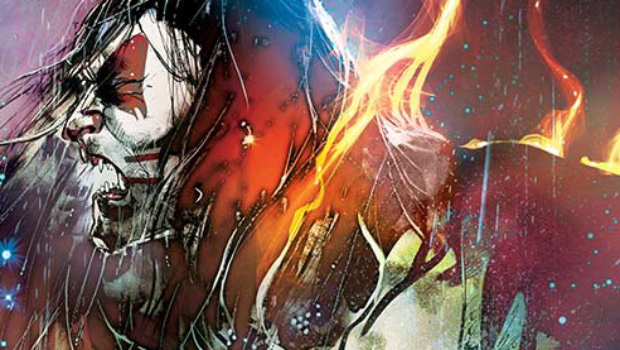 “…There is no point in surrounding yourself with idiots.” – Lord of the Wasteland

This issue begins with our protagonist, alone, walking through the desert. He seems delirious and doesn’t know where he is. He is visited by an angel that calls herself Lofiel. She appropriates the sword of Immortality and, thanks our hero, whose only concern is where he can find Mania, who he was separated from since the last issue.

Chu and Loebs bring our hero into yet another era of Kisstory. Jay still doesn’t understand the significance of the sword of Immortality, but he wants to return to his normal, drab humdrum life and is willing to do whatever it takes to achieve that goal, but now another strange creature lay claim to the sword. What makes this issue fun is not knowing if Lofiel is an angel of truth or a fallen angel. We get to follow our hero as he tries to figure out who the rightful owner of the sword is. We catch up to Mania who has been imprisoned by her own father and has the gal to imply that he’s been a good father. Yes, most fathers imprison their daughters and keep them from achieving their goals. When Jay finds out what happened to Mania, he asks Lofiel for the sword. He wants to confront the Lord of the Wasteland to free Mania from Tyranny. Great stuff includes the return of an albeit much older Ramon Ramone and the arrival of another angel, a popular musician from another era.

Edu Menna brings his usual awesome artistic brilliance to this series. The opening scene in the desert gives us a feeling of loss and helplessness for the main character. Menna’s style fits this title well. Highlights include the splash with the arrival of this issues special guest angel and musician also the transformation of Lofiel.

The Lord of the Wasteland has imprisoned his own daughter and wants to keep Jay away from her. Jay is struggling to know what the right thing to do with the sword of Immortality is. Heaven and Hell collide as the protagonist confronts…to be continued. ***1/2 (8.3 rating.)