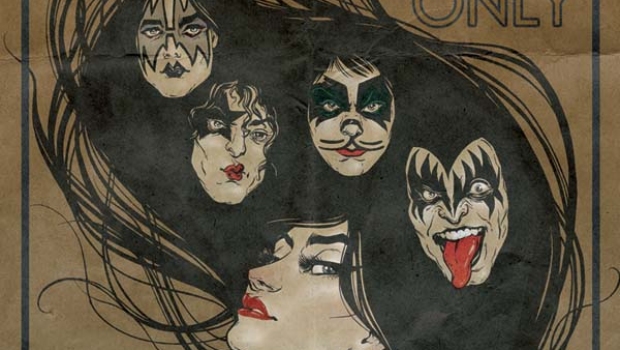 The story is set in 1974. Vampirella, who has been with us for about 5 years, is searching L.A. for demons and monsters. Kiss, on the other hand, has been touring the country to promote their debut album. The four make-up clad rockers take a break and head to L.A. to begin their second album. Both Vampirella, along with her own band; Witchkraft, and Kiss are making great music and this issue captures the L.A. music scene. I grew up on Kiss music and Vampirella comics so this is an exciting issue for me! Loved it.

Christopher Sebella brings us into the action slowly for issue one. He takes his time introducing the characters and has obviously done his research into Kiss’ first trip to the City of Angels. We see Vampi arriving with her band, Witchkraft, and playing local venues.

Kiss also arrives and gets ready to record what will become the record that is considered by many rock historians to be the first grunge album; Hotter than Hell. The opening scene has a young couple, apparently record producers, driving along the highway and listening to some demo-tapes of unknown bands.

What happens next is shocking, I won’t give it away, but there’s something wrong with the couple that causes them to behave strangely. Issue one is a great set-up, we still don’t see Vampi interacting with the gods of thunder but we see their paths about to cross as our heroes frequent the same bar.

Annapaola Martello’s art is kind of rough and cartoony at the same time. It evokes Kiss Two Marvel Super Special appearances from the ‘70’s rather than the detailed look of Vampirella’s Warren magazine art. This is definitely a plus for the issue as Martello takes us on a tour of ‘70’s L.A. where the fashion of that era evoked a kind of animated flare.

Also, the band obviously looked like cartoon characters in their make-up days as well. The smoke-filled bars of ‘70’s era L.A. are well construed, I could almost see Kim Fowley in the crowd checking out the ladies and hoping to sign them with a different name…The Runaways, however Joan Jett and the other ladies weren’t in this band, that would happen about a year later. All in all, Martello’s art fits this story.

Not a lot of action in this issue true believer but the set-up is there for better things to come. With a plot that involves everyone’s favorite scantily clad female vampire and the greatest rock band of the ‘70’s, as voted on by the readers of Cream, Circus, Hit Parader and all the major rock magazines of that era also some shady goings on from a group that’s recruiting rock bands for unknown reasons that seem to involve the supernatural, you know this one’s gonna get good quick! *** (8.7 rating.)