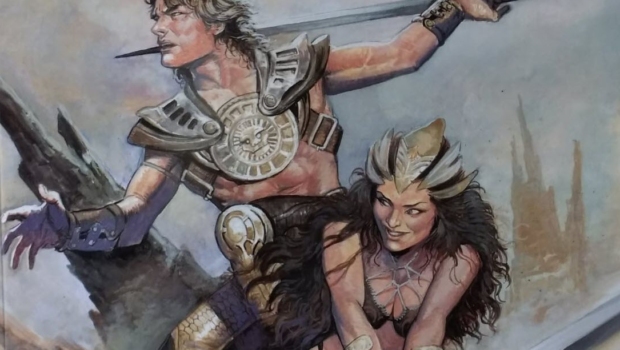 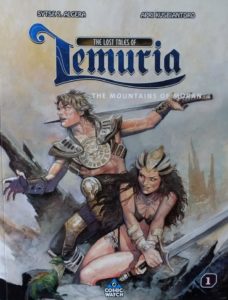 For someone living in the Netherlands, there can nót be nót a comparison to the Don Lawrence’s STORM, in which a man, a beautiful woman and a colored alien are the main leads all done in gorgeous realistic oil painting drawings in a science fiction decor. But frankly despite the similarities there are enough differences to make this more unique then you might imagine.

This is a new series from Sytse Alegra and the Indonesian painter/artist Apriyadi Kusbiantoro: Apri for short. For Apri it is his comic strip debut on the European market and gladly not his last adventure as he also drew an amazing story by writer Willem Ritsier published only months ago. As a fancier of great art, I can only applaud more Apri-work!

Why is this turning into an Apri-tribute right off the bat? Guess when you like art so very much that the only show you bingewatch is “Inktmasters” it is just the thing you do 🙂
But really, just look at these amazing scenes and be not impressed. You see Apri growing during the pages of this book, especially with facial expressions which are not consistent throughout the issue but overall this is nitpicking, because you feel the love for the art and the characters come oozing out of the panels.

I am actually very impressed by the script of Algera, which of course has those basic “Storm” elements but he uses these elements to make something much more. Of course Storm was a groundbreaking series in the Seventies, which is a feat impossible to overthrow but during 40 years storytelling and other techniques have evolved and this is what I am really noticing here. It makes for a smooth reading, with good dialogues and a really lovely flow throughout the story.

Lemuria is a lost civilization here on our Earth from long before our era. At the end of the seventies, a cave is discovered in the Himalayas containing numerous vehicles. At that point in the introduction we jump back in time to Lemuria. We meet Russ, an young man who is allowed to go fishing on the dangerous ocean for the first time. He soon learns about the dangerous animals and wild forces, but is then kidnapped by Centauri, aliens who are looking for slaves. On the spaceship he gets acquainted with Carp, who was also captured by the Centauri, and together they try to escape. This story regularly changes places with the story of Cyann, a slave girl who saves the life of a rich boy and is bought free by his parents. The slave trader, however, does not want to let her go and tries to get her back. Both escape-stories intertwine in the last pages of the book, setting up more adventures for the now-threesome group.

Apri’s drawings speak for themselves and are really food for Storm-fans. It is a first part, so we have yet to get to know more about the characters and the world that Algera wants to show us but all this is promising a lot for the future.