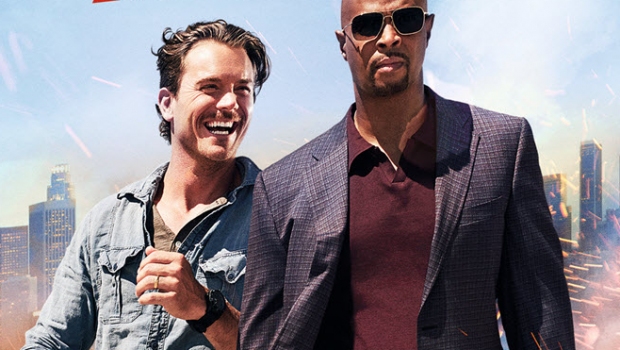 Back in 1987 the world was introduced to the first Lethal Weapon movie. A fun action movie starring Mel Gibson and Danny Glover. Gibson plays a suicidal cop paired with veteran Murtaugh trying to stop drug smugglers.

Fast forward 3 extra Lethal Weapon movies, we come to the present day where some tv exec got bored and started looking in the bargain bins for a movie or tv show to recycle. The choice was made; Lethal Weapon.

Cue the sound of millions of Lethal Weapon moviefans cringing in fear. I mean, we’ve had hits (Fargo, Friday Night Lights, Buffy The Vampire Slayer and misses (Clueless, Rush Hour, Dangerous Minds) with movies turned into tv shows, let alone one with a whole new cast. So going forward one needs a solid cast, good writing and great action scenes. I’m happy to say that Lethal Weapon has all three.

Having eighteen 60 minute episodes to flesh out your characters instead of four 90 minute movies (with a shared cast) does help. Riggs gets the most of the fleshing out. Changed from a Vietnam vet to an ex-navy seal Afghanistan vet isn’t much of a difference, but his pain of losing his wife feels different and more real than Mel Gibson’s in the first movie. He doesn’t seem as “crazy” like Gibson’s version, his depression feels more real. Riggs is still suicidal, putting a bankrobbers gun to his head in the first episode.

Both Murtaugh and Riggs feel familiar, but both have a bit more and slightly changed backstory. Murtaugh has his first day back at the job after suffering a heart-attack and needs to lead a stress free life to avoid another one. Riggs is a Texas transplant to LA following his wife’s death. Contrary to the movie, Miranda died a short while ago, not 11 years prior to the movie. Clayne Crawford does a great job portraying Riggs, and Damon Wayans helps bring Murtaugh up to speed. Instead of being a tired 50 year old cop, Wayans is still a 50 year old cop, but is a bit more youthful than Danny Glover.

Not all eps are great but none are boring. The rest of the cast are great too, Scorsese brings some life to the morgue, Murtaugh’s kids have more depth than in the movies and Kevin Rahm (Mad Men) as Captain Avery tries to reign in the insanity (and fails).

Does it surpass the movies? I prefer to see them as separate entities. The movies (and the first one especially) are a bit dated. Great movies, absolutely, but a bit dated. The series is a Lethal Weapon for a new generation. Bring on season 2 lamzak!