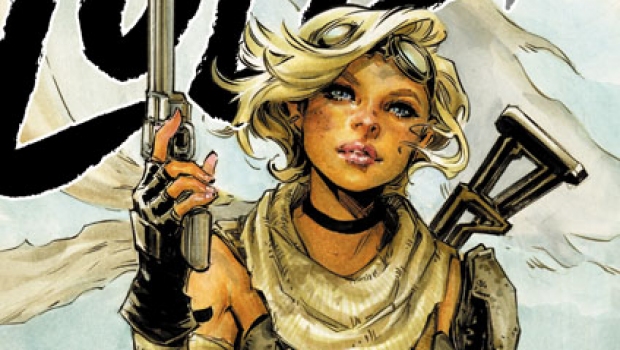 Aspen is revisiting Lola XOXO with a new 6-issue story, where Lola and friends are on the run from Governor Edgar and his croonies!

Lola Jones, a woman separated from her parents due to a nuclear apocalypse, is on a quest as she wants to reunite with them. Thanks to Lola’s righteousness and stamina, mutiny started at The Wasteland Trading Company, and now the Governor Edgar is after her and her friends.

At one point in this first new issue, Lola and her friends arrive in the town of Artemis, New Texas to get some well-deserved rest. After settling down, a present was handed to Lola: a dress, and with it came an invitation for a big party that very evening. Of course Lola was wondering who gave her the dress and Conrad, one of her friends, feels the situation in the town is somehow off.

At night Lola arrives at the party, and she is looking for her friends and have a good time. But there is an anti-climax when her enemy -the not so lovable Edgar- drops by and starts poisoning folks in order to get his hands on Lola. Instead of filling her with bullet holes, the scoundrel wants to fill Lola’s cavities… which beckons the spoiler-ridden shout ‘The dress came from him?!’

That dude sure has some serious issues, let me tell you that!

In the middle of the fight another type of evil appears. 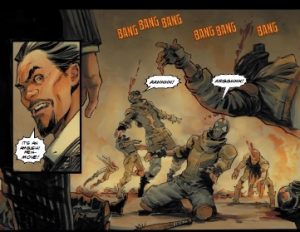 Will Lola work together with Edgar to eliminate this newest and baddest of evil??

The story Oum has concocted feels like it is a mix of the TV-series Revolution with a tad of Mad Max.

The artwork by Siya Oum is terrific. Her lines and coloring are great.

Storyline looks to be about being on the run from Edgar, but it beckons the question as to why they have time to party?

Conclusion: good comic, story, drawing and coloring are stunning, this is a must buy! It got to me, I want to read the rest, and I hope you will too!!

Willem van Laak Collecting comics as a child, and got back in the scene couple of years ago. Spiderman, Batman, Gen13 were the main comic-sets he collected, but his interest grew (and still is growing). Next to collecting comics, he plays on the Xbox One and watches a lot movies and series. Married with Brigitte, and has two kids, Joël and Cas.