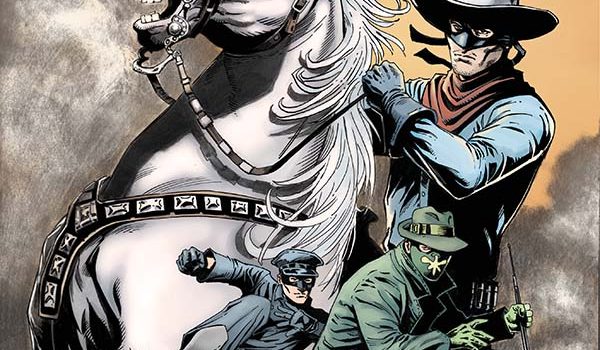 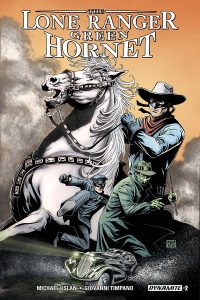 The Publisher of the Daily Sentinel, Dan Reid died in his Uncles arms. With his dying breath he asks his uncle, john, who was once the masked avenger known of as the Lone Ranger, to guide his son, Britt. It is John’s hope that Britt will become a new Lone Ranger for the modern era (1930’s) a symbol opposing urban lawlessness for a population that is weary and tired of the depression. A new gang that’s sprung up from the Nazi bund, a hate group tied to…an all new Cavendish gang. The government wants the aged John Reid to come out of retirement one more time. This issue opens in 1917 with Teddy Roosevelt telling stories at a dive bar in New York City. The President toasts John Reid as the man who ended the threat of the Cavendish gang once and for all. He’s among a group of legends being toasted including Buffalo Bill, Annie Oakley and Black Bart. The aged western heroes are reminiscing about a time that has just vanished as the modern era has taken over. Then we jump to 1938, the final years of the great depression. Elliot Ness is laying out his plan for dealing with the Cavendish gang and John Reid is not happy with his suggestion. A great introduction which includes true characters and events with the fictional ones of the Reid universe.

Uslan makes good use of historical settings and events to tell his story and seamlessly integrates the worlds of the Lone Ranger as well as the Green Hornet. Then he brings us back to the era of the young John Reid when he was the Lone Ranger in an event I’m sure will tie into the present day story at some point. In this flash back we see the Ranger and Tonto attacking Black Bart when a man that I assume is a bounty hunter shows up and subdues all three, after they’ve been weakened in battle. The Ranger and Tonto try to convince the man that they’re not with Bart but are there to subdue him too. The man shoots back that he’s nabbed Black Bart, a masked man and an Indian, and he should blow them all away right now. At this point Tonto says to kemosabe that maybe it’s time to get rid of the mask. all around an exceptional issue.

Timpano continues to bring excellent art work to Dynamite’s titles. His characters based on real people mix well with the fictional world of the Reid’s. The way this title is written and drawn you’d swear it was all factual out of history. The way Elliot Ness and other real people out of history are drawn is spot on to the way they actually looked. Great issue all around.

The Lone Ranger looking tall and proud on top of Silver is the first thing the casual comic store surfer will see. Beneath him is his grandson, the green hornet at his side his trusty partner in make believe crime Kato executing a flying drop kick, both poised and ready for battle. Beneath them is the black beauty. A cover to make fans of both characters mouths water looking for more.

Brilliant writing and art that compliments it makes this one of my favorite titles to review. The story links the two generations in a way that makes sense. This issue sees the truth behind the torso murders and the implications are far more than anyone could have guessed. Britt Reid finally dons his superhero persona and it’s not the Lone Ranger which makes John Reid upset. He also does not approve of Britt’s technique so he seeks out someone else to become the Lone Ranger. Someone that has already upset Der Fürher! Excellent stuff! 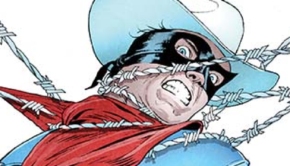