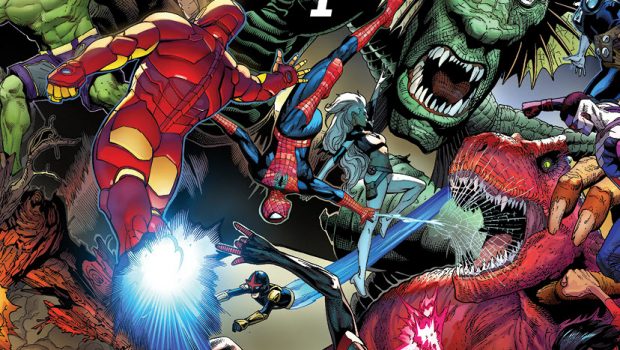 Marvel has decided to give us a sneak peek at their Monsters unleashed title and the action begins right away as a weird giant monster is attacking Boston Massachusetts. Then the megabaddie called the “Controller” shows up with the age-old command: “Destroy the Avengers.” Like that would be so easy. Then we’re taken to other parts of the world where other Marvel heroes are facing equally daunting creatures. So far, the action has it as our heroes seem to be taking on insurmountable odds. A fun intro to what looks like a classic clash of the Titans.

Cullen Bunn is always a fun read. He knows just the right mix of heroic action with in depth story telling. This issue is just a tease of what’s to come in the pages of the marvel universe. It’s another tie in to multiple titles to introduce new readers to the Marvel dynamic. Each monster that attacks seems to know the hero’s weaknesses and exploits that. This issue is only an intro, but what an intro! It looks like the whole marvel universe is going on an action-packed adventure that will take each hero to new depths of excitement.

Steve McNiven captures each Marvel character as spot on as they can get. His monsters on the rampage splash pages are awesome to behold! The creatures take on a life of their own as they wreak havoc throughout the planet. His heroes’ display a concentrated sense of urgency while the victims display the appropriate looks of fear and confusion you would expect in a situation like this one. Very nice work.

The Cover:
This cover represents chaos personified as Marvel’s main heroes are throwing everything they have at a couple of monsters unleashed. The monsters are some type of amphibious creature and what looks like a red T-Rex. They’re attacking an unsuspecting world as our hero’s rush in to protect the innocent. A fun look at the Marvel universe in action to say the least.

This is just a set up for what’s to come in future issues of the Marvel universe but it shows what our heroes are up against and in the capable hands of this creative team we know that bigger and better things are coming in an epic tale of non-stop vigorous fury unleashed on an unsuspecting world. Where do these monsters come from? What is their reason for attacking the earth? Is there some other force controlling these mindless minions? Everything will be answered soon, I’m sure. I can’t wait for the first issues to be released.