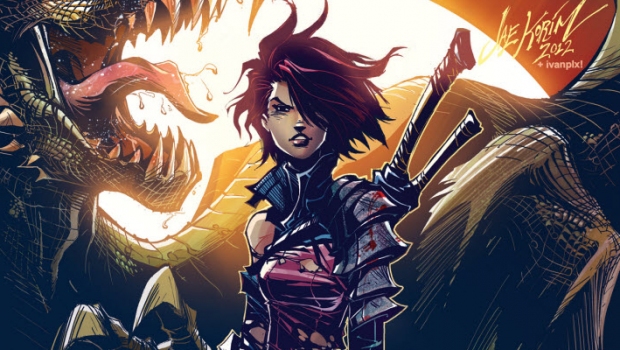 Red5 surprised with the first series of Neozoic, telling the tale of an alternative Earth’s distant past where a alien spaceship misses an asteroid and is destroyed on impact. That impact alters the course of said asteroid and this leads to it NOT smashing into our lovely planet, but into Earth’s. Following the most noble and most logical of all `why did the dino´s went extinct´ theories, this means that the dinosaurs will love and 65 million years later, dinosaurs and humans exist side-by-side. Deal with it!

The original series is collected in a trade, collecting all eight issues. It was written by Paul Ens, drawn by Jay Korim in a very distinct (chaotic yet with a solid impact to the readers senses) aided by solid colouring by Jessie Lam. It was published by Red 5 Comics and came with a price tag of $24.95, which is totally worth every penny.

The lead character is a woman named Lilli Murko, who is a member of the Predator Defense League, keeping the human city free of dino’s. Early in that story Lilli saves a Talpid-girl and takes her into the city. Talpid’s are a different race and are forbidden in Lilli’s city. This all sets of a chain of events, leading to a massive war between races and cities, in which the readers discover many characters with each chasing their individual battles.

It’s an action/fantasy story, and the reader is getting plenty of action, from fist fights and sword fights to amazing scenes of dinosaur-killing but also where dinosaurs are being controlled telepathically.

Writer Paul Ens is not really into explaining much about the religion, the telepathy nor the various races but that is practically its only fault since Neozoic is a dynamic read, which feels like a rollercoaster going to many places before coming back to a resting point. Reading this dino/human mingling alternative future makes for a very entertaining read.

Now Red5 is back with the first issue of the second volume, this time with a new colorist and it looks like the art is somewhat sketchy, as if the artist is taking a new approach. It still has the same dynamic feel, the same snazzy dialogue and even the same lovely individuals you met in the first volume, led by the baddest dino-battling human-defending Lilli Murko, who is still taking care of Milo, the telepathically adapted girl from the underground Talpid-race. Lilli is something between a traitor and a hero, due to Milo and her job which makes it hard to take care of the city of Monanti.

I can highly recommend this series, based on the quaint art and the solid story. 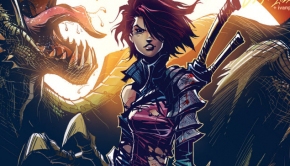