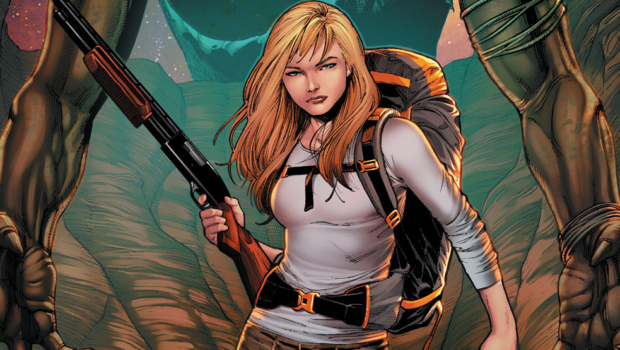 A mother enlists on a hiking trip with her three children after suffering a recent tragedy. As the hike progresses this family finds themselves being stalked by unseen adversaries. The tensions flair as John Cotter realizes he needs more ammo and Emmy starts this night with a shooting spree.

Victoria Rau starts this chapter of the story with a strained relationship between the hiking families as their paranoia grows and they’re still unsure of their enemies. Ron wants the families to clear out after Emmy get’s hurt. But Emmy says she’s not leaving until they find Debbie. Nerves are frayed, and loyalties are tried on this little trip through the woods. I really enjoyed the box that Rau is forming around the hikers. It’s a great story and great stuff includes the no nonsense mom whose thrust into the situation where she has to protect her offspring from unseen dangers and The discovery of a secret tunnel!

Marcelo Basile brings a simple yet commanding style to this issue that helps bring us closer to each character as we see their desperation explode on their faces. Highlight’s include the splash where Jason is compromised (no spoilers) and the depiction of the rocky crevasse itself.

Feelings of despair and hopelessness give way to panic and anger as the predators are closing in. It’s an issue you can’t put down as this group of unlikely heroes learn quickly who their friends are and who they can trust. It’s a downward spiral as this group has to fight their way to freedom. Their backs are against the wall when…to be continued! *** (8.4 rating)