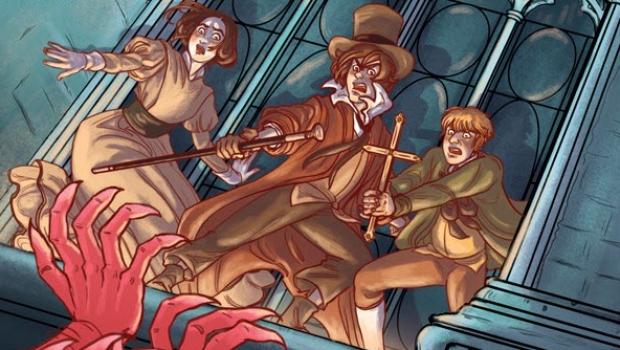 Peter David’s take on the Charles Dickens classic is brought to comic book format by Nicole D’andria. This issue opens with Fagin in a terrible mood, so terrible he’s willing to toss people around like rag dolls and break the necks of little old ladies. He winds up in a church and commands all within range of his voice to enter. There he commands the townspeople to bring in the boys, dead or alive. Dodger and friend are rushing through the church, looking for Drina before Fagin can find her. D’andria gives this issue a sense of urgency in a race against time to stay ahead of Fagin. A fun read overall. 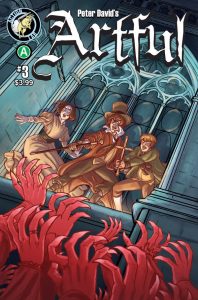 Nicole D’andria picks up the pace with this issue and delivers a fine interpretation of David adapting Dickens. The characters behave the way we would expect and yet there’s a few twists (if you’ll forgive the pun) down the road that make this interpretation it’s own. It’s surprising how well vampires fit into the world Dickens created. Next we’ll probably see the Zombie of Christmas future in “A Christmas Carol.” A vampire offers to help Dodger in his quest but only after attacking him and being warded off by a cross. What could have been tongue in cheek writing is rendered surprisingly well and the whole sordid situation leads to a highly entertaining issue, very well done indeed.

Laura Neubert’s art is reminiscent of Roberta Rivera’s take on Oliver Twist. Her panels help move the story along and her panels are very reminiscent of the Golden age era of comic books which helps bring about the feeling that we are in a past age. Her Dodger is also reminiscent of Jack Wild from the 1968 film version of “Oliver Twist.” She is clearly having fun recreating Victorian era England.

This cover is a great depiction of what’s going on inside of this issue, we see Drina, the Dodger and Oliver Twist standing in front of a church’s stained glass window, the image is slanted, letting us know our heroes’ are in trouble. demonic like claws are reaching up at them from the bottom of the page. Giving the whole scenario a feel of imminent danger. The casual comic store surfer won’t be able to resist picking this title up and giving it a peak.

The comic book reader who isn’t that familiar with Dickens classic will probably still enjoy the tale between the pages of this little gem of a comic book. Likewise, people who love the original and are clamoring for more should enjoy this take on Boz’s intriguing world of pick pockets and vampires. It may be a bit too violent for some readers but the pacing is good and the characters shine in this mostly faithful adaptation of Peter David’s novel. A must read for David and Dickens fans alike. 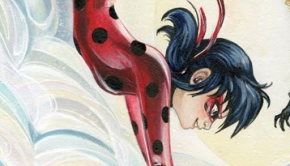 MIRACULOUS ADVENTURES:New Stories Based on the Popular TV Show! →