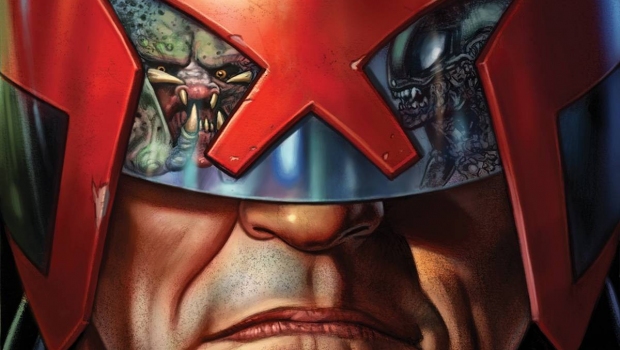 “I’m pretty sure these guys came from somewhere a lot farther than Mega City One.” – Buck

This issue opens with a predator running through the woods, but he’s not hunting, no, instead he is being hunted. The hunters are a strange human/animal hybrid a la Island of Dr. Meraux. The hybrids take him down and Buck, the human/deer hybrid, tells the others that the “Doc” will want him alive, however, The Predator may not still be alive, that’s when the prolog ends and we cut to Judge Dredd on his motorcycle. His honor crashes a dive bar full of mutants in search of fugitives from Mega-City One. The good judge discovers the mad doctor Reinstot’s Island where he’s conducting experimentation on creatures including the Predator. This is a clever way to join the three titles, I’m not going to reveal what he does with the Xenomorph, just to say that’s it’s something that’s never been done before. Quite interesting to say the least.

John Layman does some very interesting things with three titles that you wouldn’t think would ever be compatible. This is a brilliant way to mesh these three titles together. The conclusion of this issue promises to bring us more adventure in the next issue and take all three characters in a direction we’ve never seen before. I believe that fans of all three titles will be satisfied with the introduction to the story and eagerly await the outcome…

Mooneyham’s imagery captures all three characters very well. His panels help fans of all three titles buy this meshing of the worlds and his characterizations are spot on. He’s clearly done his homework on all three titles and by the end of this issue we are left with our mouths watering for what’s in store for the next issue. He’s the perfect artist for this teaming of the comic book companies.

Again it’s simple yet effective. It’s a close up of the Judges face with a Predator and a Xenomorph reflected in each eye piece. A well painted cover that’s sure to please fans of Dredd first, then the Alien/Predator crowd.

The first issue delivers with a punch and a few shocks along the way. This chapter hints at what Dr. Reinstot wants to do with the Xenomorph’s in his twisted laboratory and if he succeeds he doesn’t even take into consideration the horror he could unleash…or does he? Is he on some sick and twisted revenge kick? Is he so driven by ambition that he doesn’t even consider the cost of what he wants to accomplish? Is he so filled with hatred that he doesn’t care what his creation can do? Or worse, maybe he wants that creation to wreak havoc on humanity to the point where he is hell bent on destroying as much human life as possible, including his own!? 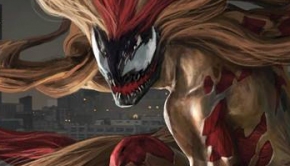