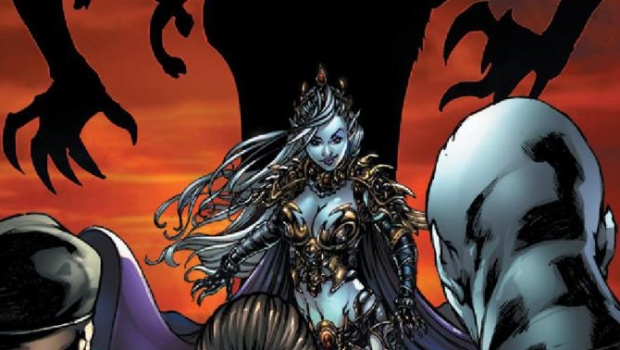 The government has held a secret for many years. They have constructed an Island where they house actual monsters. In 2012 all hell broke loose and led to the evacuation of the Island. The Elf queen had planned to use her shape shifting abilities to leave the Island with the cyclops. The mercenaries had other plans and a battle ensued for control of the monsters. And now we’re at the final chapter and we finally find out who, if anyone will ESCAPE FROM MONSTER ISLAND.

Tedesco, Brusha and Taylor bring the mercenaries and Xorn’s people into a dilemma within the first few pages of this issue. They’re leaving the demolished building to look for the queen, but Xorn reminds them that they have to find the doctor first. In the meantime, the Cyclops has carried Kelsey to safety. The final issue gives us quit a few twists and turns as the Elf Queen is up to no good again. The writers take us on a final rollercoaster which is tense and fun at the same time.
Granda’s art continues to impress and, as always, I like the homage to the world of Ray Harryhausen, Carlos art is my favorite thing about this title. He brings all of these “monsters” a sense of humanity as they fight for their survival. His panels help the story flow smoothly and the battle scenes are expertly rendered.

This cover shows us that this is the final showdown as the General, Kelsey and Xorn are facing the Elf Queen who is using her shape shifting abilities before she attacks. We see the queen shifting but can’t quite make out what she’s shifting into. It should peek the reader’s curiosity enough to make them want to buy the issue to find out exactly what she shifts into.

This issue keeps us guessing until the final page. Will anyone survive the final onslaught? Who will wind up controlling Monster Island, the Elf Queen or Xorn? And no matter who winds up in charge will the Island itself survive the final battle? So many questions with so little time to answer them. It’s a pulse pounding race to a conclusion that will satisfy some but perhaps not all of the readers who followed this title. ***1/2