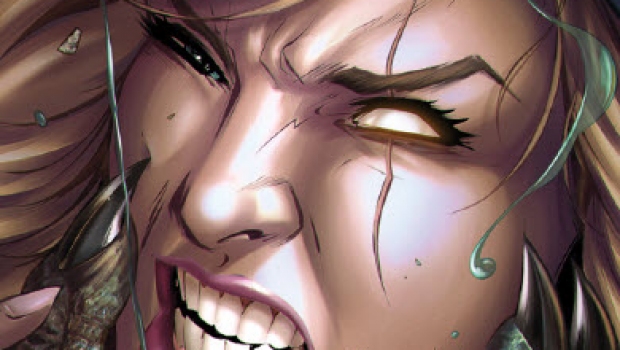 “Just once I’d like the bad guys to be on a beach or something.” – Robyn Hood. 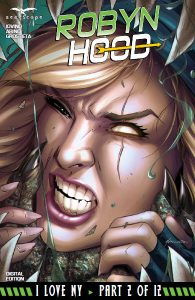 Robyn got back in business after rescuing Gabby Martin from a would be mugger. Gabby leads Robyn to a gang of drug dealers and Robyn succeeds in taken out some of the gang’s leaders. Robyn’s now on her own but she winds up getting back in business after several boring months of being away from the action. This issue opens with a young boy named Danny Franconi running away from an unseen kidnapper. The narration describes how many persons are winding up missing and Danny disappeared after finishing his shift at a fast food restaurant. Robyn decides to investigate the 9 missing persons.

These characters are second nature by now to Brusha and Iovino. They send Robyn looking for a Big T. A pervert tells that he’s Big T and she asks if he’s sure about that and he says yes in all the right places. Our protagonist hasn’t got time for the pervert’s weak attempts at flirting so she bends his arm and he tells her where he is. The writers keep Robyn focused, as always, on the mission at hand. The reason she’s a great protagonist is that she doesn’t take any guff from anyone. When she takes on a mission she sees it through and this team gives her the determination to find the answers. As always they bring us heated action and interesting characters.
Arino and Riviero split the artistic chores on this one. Their styles are similar so it’s not noticeable when one stops and the other takes over and the art is very nice, as always. I won’t reveal what creature she has to battle in this issue but it’s well drawn and and the depiction of the New York Sewer is a good place for our antagonist to set up shop. Pencils and inks are in top form.

The comic store surfer will stumble upon a comic with a close up of the protagonists face and she’s angry! Around her neck is a claw like hand, the hand of this issues antagonist. A well-conceived cover that should attract the surfer to this issue and bring sales up.

This issues story is a simple tale of kidnapping and the heroine using her skills to find the child in question. The antagonist puts up a good fight but he’s no match for Robyn Hood. In what seems to be a simple by the numbers routine tale for this title we find out by the end of the issue that the antagonist for this tale was just a distraction and we haven’t seen the real antagonist yet. This antagonist has something up his/her sleeve and instead of ending this story has just begun, the plot thickens…to be continued. ***1/2