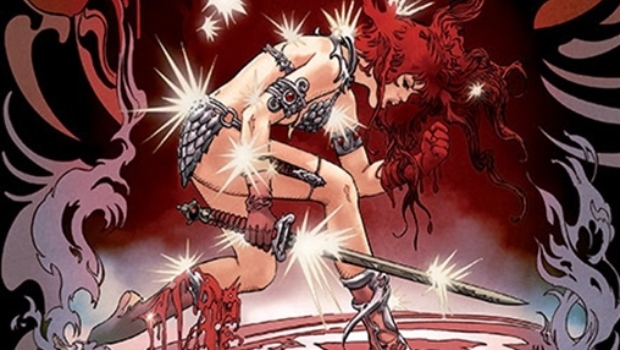 Roy Thomas and Esteban Maroto return to give us a story of the She-Devil in all her white, black and red glory.Red Sonja—The Ballad of the Red Goddess

Roy Thomas’s return to Red Sonja was enough to get me to buy this book. Call me nostalgic, but I haven’t read a really good Red Sonja story since the days when the She-Devil was still in Marvel Comics’ hands with Roy Thomas at the helm.

Don’t get me wrong, I’ve enjoyed (and am still enjoying) Dynamite’s take on Red Sonja; it shows some great art at times and the storytellers don’t overtly try to turn the character into a one-note social justice warrior. The Dynamite books have had their ups and downs, just like the previous Marvel iterations, but Roy Thomas’s and Frank Thorne’s iteration was a tough act to follow. Dynamite updated Red Sonja for today’s market, but Frank Thorne’s Ghita of Alizarr (a pastiche of Red Sonja that had its glory days in the ’80s) feels more like an updated version of Red Sonja than Dynamite’s version ever has. If Red Sonja were ever to be adapted to the screen à la Game of Thrones, Thorne’s Ghita would be the way to go.

The great thing about Red Sonja is that she has always been a strong female character. I understand that women portrayal in popular media still has a way to go, but the latest rabid trend to show “strong” female characters was not launched yesterday. It reaches back, way back, long before Carrie Fisher’s Princess Leia, long before Leiji Matsumoto’s Queen Emeraldas and Kei Yuki, maybe even before Robert Howard’s original Red Sonya and Belit.

I remember reading an article titled “Enough With ‘Strong Female Characters’, already” based on an interview Natalie Portman gave to Elle a few years ago where she talked about Hollywood’s need for strong, ass-kicking female characters. Strong female characters don’t necessarily have to be physically strong. “Strong” should refer to how well characters are developed. If they have vulnerabilities, they are more relatable, hence stronger. And Portman is right. Personally, I’m tired of seeing waif-sized female characters beating the crap out of 220-lb guys. I mean, sure, it was fun for a while, and I get it—women can be strong too, but enough already. Show us realistically strong female characters that are relatable. It’s not our differences that will bridge the gap between male and female characters, it’s what we have in common. Show me a feminine hero that goes through realistic struggles, that has her weaknesses, like any other character, and show me how she overcomes those. Now, that’s a strong character. Ultimately, this is how I will evaluate a story, whether the character is male or female, straight or gay, black or white, extra-terrestrial or human. That being said, too many insecure men can’t relate to a strong female character, and when I read the numerous angry reactions to Captain Marvel, I can’t help but hear the faint echo of the insecure male ego at work. How does this relate to Red Sonja? Maybe in that I’ve rarely (if ever) come across any such complaints about Red Sonja—whether it was the original Marvel version or the Dynamite re-imagining. That being said, no matter how often Red Sonja is being portrayed as a feminist icon in her current iteration, the way she is physically pictured strongly underlines how she is still being drawn for a male audience. Dynamite is still to be congratulated for fleshing out Red Sonja for today’s readers, however. The original Red Sonja was never a one-note superhero, but she was still a product of her time. In this or any previous incarnation of Red Sonja, the iron bikini is not there for armoring reasons! Like Dave Sims’s Cerebus said to Red Sophia (another Red Sonja pastiche), “They’d probably (meaning her breasts) heal if you stopped wearing that chain-mail bikini…”

How does Ballad of the Red Goddess fit into all of this? What I have seen so far is a satisfying blend of nostalgic, throwback iron-bikini imagery and updated storytelling (the rape scene is particularly difficult to read), and we have a mature Thomas and Maroto’s European sensibilities to thank for it. It’s a tale all on its own. It is difficult to review it fully, because the advanced PDF copy I received is incomplete. The front matter is there, including words by Thomas, Maroto, and Casas. The sketch section is also complete, and it’s a real treat. The front cover is absolutely gorgeous, and if there were a spot left on my walls, that is the Red Sonja art piece I’d choose to frame and hang. The back cover art is worthy of the best dark fantasy setting ever. It reminds me of John Buscema’s dark scenery for Warriors of the Shadow Realms, or Ralph Bakshi’s Wizards. It makes me want to reread Tolkien, Brooks, Eddings, and… you get the picture.

Ballad of the Red Goddess was originally printed for the Spanish market. The front matter has quite a lot to say about how the project came to be; for example, how Thomas was brought in to write dialogue for a book that was already plotted and drawn. It’s also interesting to learn that Maroto is not new to the Red Sonja universe. Based on what Thomas says in his introduction, the iron-bikini version of Red Sonja we saw way back during the Marvel days—that is, the second Red Sonja that would replace Barry-Smith’s chainmail shirt and hotpants wearing version we saw in Conan The Barbarian #23 and #24—would be influenced greatly by a pinup drawn by Maroto that the artist sent to Thomas. In this light, Maroto is not re-imagining Red Sonja in Ballad of the Red Goddess as much as he is revisiting her. It feels like an interesting mix of new material and nostalgia, driven by an artist and a writer, at the top of their art, revisiting an old favorite decades down the road.

Red Sonja Ballad of the Red Goddess is coming out March 27. I hope it’s a smash hit and that Dynamite brings out more of the same. With the recent re-imagining of Conan the Barbarian by Marvel, Robert E. Howard’s Hyborian Age is being reborn. Despite the accusations of the new Marvel Conan book bringing back male toxicity to the series, I welcome the two new Marvel Conan titles, and Ballad of the Red Goddess is an added Hyborian age bonus.