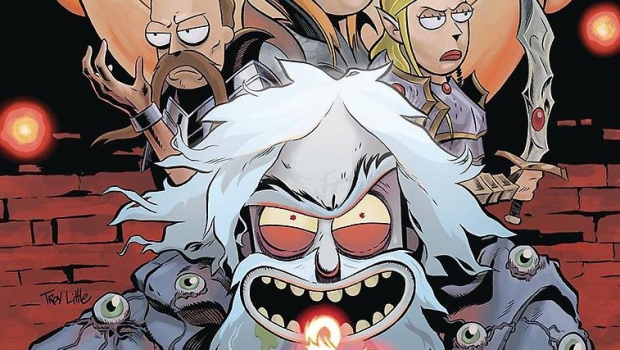 I never liked Rick and Morty, which is not really fair since I never gave the book a chance. Once, long ago, I checked it out. One glance at the constant flow of drool on Rick’s chin, and that was it for me. (It’s a childhood thing—terrible family dinner table memories—scared for life.)

When the first Rick and Morty vs. Dungeons & Dragons series came out, regardless of my passion for anything D&D, I couldn’t bring myself to reading it. It was hard to resist because the book was written by Patrick Rothfuss AND Jim Zub, and I can’t imagine a better writing team for a D&D comic. However, I almost bought the trade paperback when it came out, but that was the closest I ever got to reading it.

I went through the same process when Rick and Morty vs. Dungeons & Dragons II: Painscape was released in comic book format. Except that this time, when the trade paperback came out earlier this month, I actually bought it. A Darkened Wish has just finished its amazing 5-issue run, the next R. A. Salvatore D&D novel was still months away, and I just couldn’t bear to wait for the next issue of Dungeons & Dragons—Infernal Tides to get my D&D fix.

I’ve never disliked a D&D comic book, and I’ve read them all: from the first DC series (Advanced Dungeons & Dragons, Forgotten Realms and a slew of other one-shots and limited series) to the current series by IDW, including the lesser-known Kenzer runs. I’ve even printed the online Tyranny of Dragons comic strips that ran on Wizards of the Coast’s website, so that I could store them in my long boxes along with my other D&D comics. I’ve liked them all. Rick and Morty vs. Dungeons & Dragons II: Painscape is no exception. It’s different, of course, and that’s part of the reason for its appeal.

D&D comics are great because they let you experience those worlds (whether it’s the Forgotten Realms, Eberron, Dragonlance, Greyhawk, etc.) where D&D adventures take place. You get to see these worlds through the eyes of other adventurers. You can play the game, either by rolling dice at the tabletop game, by joining a choice of two MMORPGs (Neverwinter or Dungeons & Dragons Online), or by playing a number of PC-based games (the enhanced version of the Baldur’s Gate, Neverwinter Nights and Icewind Dale video games; not to mention any of the legacy games still out there and playable on many computer platforms). Wizards of the Coast has even resurrected its Endless Quest series of books where the readers become the heroes and chart their own path. As immersive as the games are, following the adventures of other characters by soaking in a good D&D novel or comic book adds to the enjoyment of D&D. Gaming is the closest thing to actually walking the paths of the Forgotten Realms or of any other D&D world, but the comics, just like the novels, add a very fulfilling additional element to the D&D experience of any true fan. When it comes to a comic book like Rick and Morty vs. Dungeons & Dragons II: Painscape, the experience is that much more engrossing because it’s not about heroes of the Forgotten Realms like Drizzt or Elminster; it’s about normal people (well, dysfunctional people really), playing or actually being thrust into the game for real. And no matter how rude, crude and unredeemable some of the characters are (namely, Rick), you can still relate to them to some extent because of your shared passion for D&D.

I’m not sure if the book would be just as enjoyable to someone who has never played D&D, and I can’t say if regular Rick and Morty readers will appreciate this book, since I have never read another Rick and Morty book. However, as a huge D&D fan, I can tell you that the game references (the Easter eggs, the lore, the in-jokes, etc.) alone make this book a must-have for D&D players. The lore is splattered on almost every panel—including anything from the 1st to the 5th edition of the tabletop game. Some references might seem obscure, especially to the more recent fans, but to old-timers like me who have been around since the original blue box (not the one illustrated by Larry Elmore, but the earlier Erol Otus box), there are references on almost every page to fire up and keep our nostalgia going for the whole book. There are the knee-slapping in-jokes, like the barbarian losing her breath during a chase, with the D&D stat caption, “Constitution 5” appearing in the background. (Hint: You have to be a D&D gamer to get it!) There are also the many references to D&D gaming, the merch, the game language spilling into everyday life, but there are also the in-game references, like the fact that part of the story takes place in the Tomb of Horrors, a classic D&D adventure where many seasoned adventurers met their end. My favorite character ever was turned into bloody goo in there. There’s Rick striking up a friendship with the demilich Acererak, and chatting up a beholder… I haven’t had this much fun reading a comic book since the Keith Giffen and J. M. DeMatteis run of Justice League.

This book is just too much. It’s a fun ride where Rick and Morty are actually thrust into a real life (sorta) D&D adventure, but it also feels like an homage to D&D gaming and geekdom. It’s like being a LARPer and watching Knights of Badassdom, or being a cosplayer and watching Comic-Con Episode IV: A Fan’s Hope. I want to read it again, and again, while I wait for my local bookstore to ship me the trade paperback of the first Rick and Morty vs. Dungeons & Dragons series that I ordered immediately after reading Painscape.

If you’ve never read a Rick and Morty comic book and profanity is not your thing, it might still be safe for you to read Painscape. Every bit of profanity has been censored. The profanity is so thick at times that—due to the censorship—it’s almost difficult to read, but you’ll get the general idea. Readers who are also avid gamers will undoubtedly appreciate the character sheets for all three versions of Rick’s character in the book as he gains experience. And if, like me, you can’t possibly afford to buy all alternate covers of a comic book, the cover gallery will more than make up for it. It’s a nice bonus, even though it has become a kind of standard in these trade editions.

I don’t know what’s next for D&D comics. The Baldur’s Gate series is still going (Infernal Tides Issue 2 has just been released), but there are only a few issues left. A Darkened Wish just ended its amazing run. There haven’t been any new series announcements. I feel there is room and probably demand for a third Rick & Morty foray into D&D. And I like to think there are still adventures awaiting the Baldur’s Gate gang. Or maybe something totally new is just around the corner. IDW calls itself, “The Home of Fandom,” and they’ve sure delivered on that so far. We’ll just have to wait.

You’ve got to (bellllch!) roll for initiative, Morty! Two pop culture juggernauts are teaming up and neither multiverse is prepared for what comes next! When Morty sees a cute girl at school playing Dungeons & Dragons, he asks Rick to show him the ropes, only to discover that his grandfather is a veteran gamer. Next thing he knows, the entire family has been pulled into a campaign that escalates from virtual D&D simulations to alternate universes governed by the rules of the game. And as it turns out, Rick isn’t the only one who knows his way around a d20. 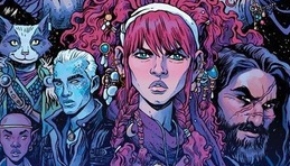