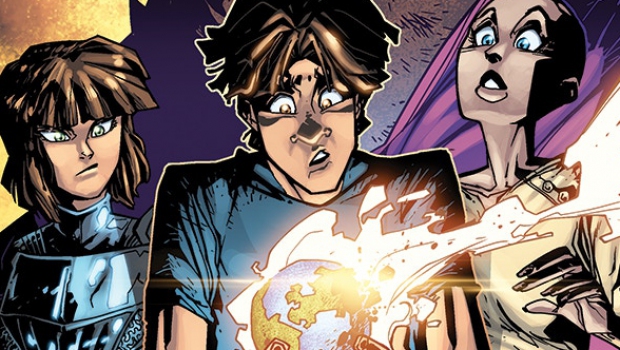 “No ‘come with me if you want to live?’ I’m disappointed, Joan.” – Baphomet

The story begins with our protagonist asleep in his bed with the narration paraphrasing John 8:44 from the bible. Then an unexpected visitor shows up, namely, a demon from the pit of hell! He wakes up in a cold sweat, but was this a nightmare?

Nicole D’Andria gets inspiration from Christian theology. Our hero goes to visit his sister, Star, in the hospital. Star is recovering from surgery after losing a breast to cancer. I’m enjoying the chemistry here between “Franny” and Star. She knows her little brother well and he can’t hide anything from her. Even though she’s recovering from surgery she can tell when something is bothering her sibling. His presence brightens her day and they share a joke or two with each other and he takes comfort in the advice of his older sister. The family dynamic is strong with this one.  After the hospital visit, he goes to “work” apparently Francis Rhoades has some psychic abilities and became a fortune teller. Only he actually sees future events and sometimes the future ain’t so bright. This is a compelling read as we see the protagonist lose his “job” after attempting to warn one of his clients about the danger in his life. It’s an interesting story that draws us into the life of its protagonist. He’s an all-around average good-hearted soul that doesn’t understand how he’s able to do the things he can do. I’ve never seen a comic book like this one before. Great stuff includes Francis’s warning to Mike and his vision of what happens to his overly aggressive boss.

Marco Maccagni gives us a slightly cartoony world for the characters that inhabit it. You’d think they would go for a grittier, horror look considering the source material, but all makes sense when you get to the end of this issue. This take on the characters is perfect for the story that unfolds. Highlights include the splash of Franny’s vision of what happens to Mike and the surprise that awaits Francis at his apartment.

This is a great first issue in an independent title that’s full of energy and a universe unique in the annals of comicbookdom. Francis Rhoades is an everyman and an all-around good guy that has evil thrust into his life and he’s not prepared for what happens. It seems that his father is the chief demon and has died. He now inherits this underworld type of dimension and then all hell breaks loose as he’s challenged for his new throne by histories greatest tyrant. But he’s saved by…to be continued. 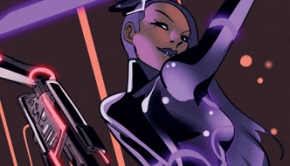