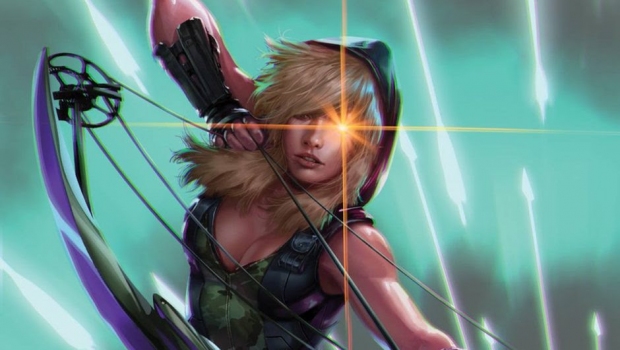 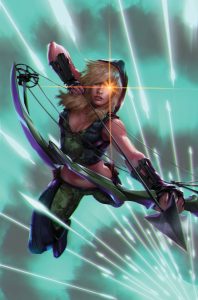 Robyn Hood, one of Zenescope’s favorite characters is back! You can’t keep a good demon hunter down. Robyn, in her last adventure took out a dangerous and powerful Cabal and got to relax, sort of, as she served as maid of honor at her best friends wedding. She’s still troubled by the untimely deaths of her friends Avella and Nicky to the point of restlessness. She’s seeking her destiny while trying to fulfill her calling, which leads her back to her first love: New York City.

Joe Brusha’s back with a new team including Lou Iovina This issue opens with the narrator reminding us of the dictionary definition of inertia. Robyn seems to be arguing with said definition as she practices her archery, refining her skills. The writers show us a Robyn that has settled into a routine of watching uninspired infomercials. Her life is lacking purpose. This team jump starts Robyn’s life and give her purpose again as a mugger grabs a purse and our protagonist gives chase. Robyn returns the purse then buys her new friend a hot dog. She learns that her new friend is Gabby Martin. Robyn learns from Gaby that a new gang of criminals called the Drone Men are active. The writers then turn up the heat as Robyn, as always, finds danger just around the corner. A good set up for the beginning of another chapter in our favorite female demon hunter’s life.

David Lorenzo Riviero is worthy of the task to recreate Robyn and friends, his renderings remind you of what’s gone on before and yet he brings his own sensibility to the characters. His panels bring the story together and help it flow smoothly. Right now Riviero is an under-rated artist. His work on Hollywood Zombie Apocolypse is superb. This artist definitely has a bright future ahead of him.

Robyn never looked better! The cover is a great pic of our heroine leaping into action. There’s dozens of light arrows sailing towards her and she has to dodge them. Her bad eye has a light shinning out of it and she is poised to fire her own bow. The look on her face is almost nonchalant. Not so much fear but more of a “Here we go again” attitude. The background colors are aqua and gray. It should please the ongoing fan and promote interest from potential new fans.

If there’s something lacking in this title it’s Robyn’s normal demon hunting crew. I know we’re starting over and the original supporting cast has all gone their separate ways, some even died after the fight with the Cabal. But this is a comic book so hopefully we’ll see some of her original partners in crime in an upcoming issue. Having got that off my chest this is a good re-boot and Gabby is a character with potential. She could be Robin (I know, I know) to Robyn’s Batman. And this issue does peek your interest in what happens next. There is a cameo from Marian which hints to her possible return. The final pages promise that Robyn will be back in business all the while setting up the next conflict.