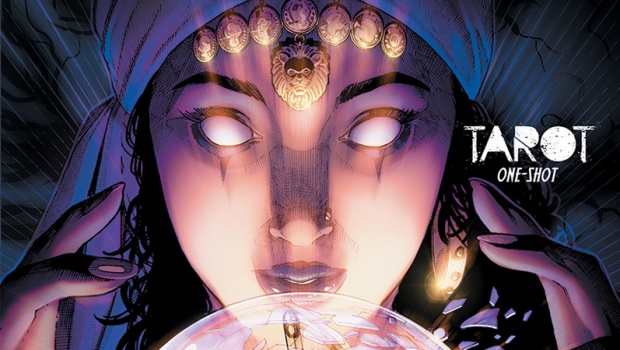 Robyn Hood is back in a new story of macabre madness. It’s a one shot from long time Zenescope author Joe Brusha. This time our hero is facing an occult organization called the order of the Tarot. Robyn, along with her friend Mystere, are pulled into a deadly game by a strange gypsy hell bent on destroying them. The issue opens with the Emperor lamenting that Robyn has escaped again and that she should have been long dead by now.

Joe Brusha pulls out all the stops as the order is hell bent on destroying Robyn at all costs, he shows his usual penchant for action well in this tale of vengeance. The order has finally had enough with being defeated by Robyn Hood and calls upon an ancient gypsy who had been banned from the order years ago, but she seems to be the only one able to destroy Robyn, so, the order risks her menacing return by giving her a second chance for the sake of defeating a common enemy. Robyn is tricked into fighting an old friend by the gypsy, who disguises her visage and Robyn thinks she’s fighting another in the extensive line of demons that she’s destroyed. It’s a fun read with many twists and turns along the way. Robyn Hood fans will not be disappointed.

The artistic team is in top form, superior splash pages galore grace this issue. My personal favorite splash in this one shot is when Robyn finally realizes that she’s been firing her arrows at a friend, not the illusion of a demon that she thought she was fighting. A great moment in this story that’s sure to please. The dumb-founded expression on Robyn’s face alone is priceless. Right behind that is the Emperor removing his mask near the beginning of this story, another great moment. I’ve often considered Zenescope’s artists to be some of the best in the entire industry and this issue doesn’t disappoint. I loved every minute of it.

This one shot serves to set up the Zenescope fan with allusions to other comics to come out from this titular story. However, it is an excellent tale in and of itself even if the reader doesn’t decide to pursue the future Zenescope publications that are continuations of this title. A wonderful way to promote more action in the Zenescope universe and yet also a satisfying read in its own right. The action and suspense all build up to an exciting conclusion/continuation that should be right up the Zenescope fans alley. Highly recommended. **** (9.4 rating)